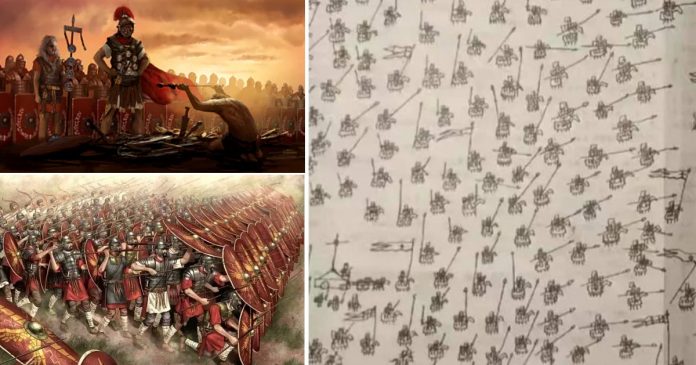 Children are known to have imaginations that are sometimes beyond our understanding. Their curiosity is triggered by something that interests them, such as a movie, a book, or something they have seen outdoors. The kids tend to exaggerate what catches their eyes and mind, then the story begins.

A mother was going through her son’s school bag, trying to figure out what makes him bring home bad grades from his classes. Upon rifling through his stuff, she discovers a notebook with a detailed drawing of an army battlefield drawn by her son. That was the day she realized his hidden talent.

In the drawing, you would see a battlefield full of soldiers from opposing sides. The “charging” soldiers on the left side are riding horses and carrying spears and flags while shooting arrows at the enemies, while the soldiers on the right are in a formation, ready to face their opponents. They are on foot and standing by. They seem to be protecting their troops with the soldiers in the front, drawing their spears, and getting ready for battle.

The father of the boy shared the battlefield drawing on the Facebook group ●【爆廢公社公開版】● on June 24. The post caption, which was written in Mandarin, reads: “My child’s exam results have been poor lately. His mother looked through his bag and found this drawing in it.”

In the post’s comments, netizens encourage the parents to help the child enhance his skill rather than enforcing academic excellence. If the child feels that his parents are supportive of his talents, then he will definitely improve his academic standing.

One person commented that the child was destined for greater things and not let exam failures discourage the child to reach his destiny. Encouraging the child will help better than enforcing him. Another netizen wrongfully commented not to let him go to school anymore as they may get in his way to live his life to the fullest. Another netizen commented that he may be a special child with special talents, so the parents must find a unique way to enhance his skills.

The preciseness and accurate military battle positions shown in the drawing prompted some netizens to compare the young boy to Zhuge Liang, a Chinese statesman, and military strategist during the Three Kingdoms period (181–234). “He’s probably some sort of modern-day Zhuge Liang,” a netizen pointed out.

Another netizen assumed that the boy might be a fan of the 14th-century Chinese novel Romance of the Three Kingdoms, and one of its protagonists Zhuge Liang, may be his idol. Another comment from a netizen said that he might be a reincarnation of Zhuge Liang, the military advisor. Hence, the detailed drawing.

Most kids’ drawings are just scribbles and fun doodling which at times take no shape. The detailed battlefield drawing, though, is an unusual artwork for a boy of schooling age. Hopefully, the boy’s exceptional artwork and the people’s response to its excellence in detail will encourage the boy to achieve more with his talents. With the proper development of his talents, what his mind can conceive, he will be able to achieve.

McDonald’s was Criticized for a Photo of a Filet-O-Fish Burger with...