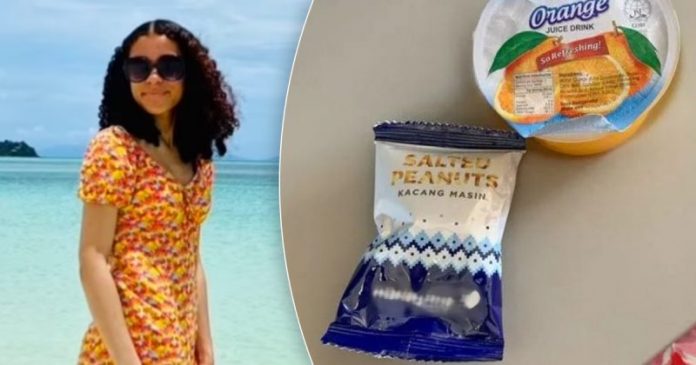 In-flight meals vary from light meals to heavy main courses, depending on the flight duration. Most international flights serve mixed nuts for snacks. A mother who was aware of her daughter’s allergy to nuts find flights where they serve these light snacks dangerous to her. Even when someone who is meters away from her daughter eats nuts and the teenager smells it, severe allergy may attack.

39-year-old mother Joanna Jones from Tooting, South London, UK, decided to bring her mother and 2 children on a holiday abroad. The family decided to visit Antigua and Barbuda, a country located in the Caribbean Islands.

After a few days of vacation, it was time for the family to return home and according to the flight tickets they had booked, they would be arriving at London Gatwick Airport straight from Antigua and Barbuda. Going on an 8-hour flight worried Joanna since her daughter, Poppy, has severe allergic reactions to peanuts. Even the slightest smell of the snack is dangerous for her due to the allergens in the air.

When Joanna and her family boarded the plane, she specifically instructed one of the cabin crew to tell the passengers not to eat nuts for the entire duration of the flight and explained to them about Poppy’s allergic reaction to the snack.

After the flight safety demonstration was done, the stewardess announced twice in a row about the warning, requesting the passengers not to eat nuts on board during the entire duration of the flight. However, the situation would have gone smoothly when an unavoidable circumstance occurred.

Shortly after the plane took off, in about ten rows in front of their seats, Joanna suddenly saw a male passenger opening a packet of nuts and started eating them. She started to feel a little panic and immediately requested the stewardess to change seats, specifically on a row away from the passenger eating peanuts.

Unfortunately, the flight was full and no one wanted to switch seats with the mother and her daughter. So the stewardess went to the passenger and requested him to stop since there was a passenger on board who was allergic to nuts. The man became furious and ignored the warning and still continued to eat the peanuts.

Joanna was beginning to worry that Poppy would have an allergic reaction if she smells the nuts. Three hours before landing, Poppy started to suffer a severe allergic reaction, and the passengers on the plane began to panic. A few minutes later, Poppy’s breathing became unstable due to ‘anaphylactic shock’, and fell unconscious.

Seeing Poppy’s situation getting worse, Joanna immediately got the ‘EpiPen’ from her bag and gave Poppy two consecutive injections, in hopes that it would maintain her pulse until they arrive at LGW and go to a hospital. Upon hearing the flight attendant’s call for help, a passenger who was a nurse provided first aid with the instructions of a doctor she contacted from Arizona.

Poppy was provided oxygen from the plane’s emergency medical kit, and at the same time, the nurse monitored her blood pressure. Her condition was very unstable, with her heartbeat possible to stop at any time.

The stressful incident prompted the pilot to call the nearest air traffic control tower and make an emergency landing at the nearest airport and arrange transportation to rush Poppy and her family to the hospital for further treatment.

Eventually, the flight landed safely at LGW Airport and an ambulance was already waiting on the runway to take Poppy to the hospital immediately. A day passed, and Poppy’s condition gradually improved. Finally, she was released and was able to come home.

Although Poppy’s life was saved, Joanna still felt upset about the unfortunate incident her daughter experienced onboard an 8-hour flight back to London. If Poppy’s allergic reaction was worse at the time, she would not have survived, and Joanna would have lost her beloved daughter.

“It was a nightmare for us as a family and most of the passengers on the flight when the man continued to eat nuts despite announcements, warnings, and advice given by the stewardess,” Joanna said. “I thought my daughter would die on the plane, and I wouldn’t dare take her on a flight again because I can no longer take that risk …”

It was an unpleasant experience for Poppy and her family because of a man who did not follow the advice and warnings about not eating nuts on the flight. All unfortunate situations can be avoided if simple instructions would be followed.