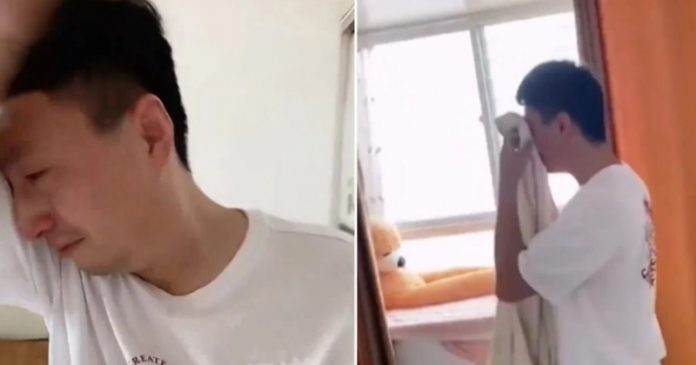 Unfortunately, not all children would respond in a way that the parents would expect. Although there are days that they would help boost their child’s academic performance, the results still return meager.

Some netizens claimed that the father was being melodramatic, though they soon realized that he has paid for his son’s tuition for a whole year. Hence, his sheer disappointment.

On Thursday, June 23, the Chinese media People’s Daily News shared a video on Weibo of a young father in a room, sobbing and wiping the tears off his eyes. They revealed in the story that it was his son’s 6-point score that led him into utter sadness. The father lives in Zhengzhou, Henan, with his wife.

It was also revealed that the father has been staying up all night every day for work to provide for his son’s Mathematics tuition fee in school. Unfortunately, his hard work did not pay off.

ET Today reports that in the past, the son scores 40 to 50 in his exams and sometimes reaches as high as 80 or 90. The father could not come to terms with the result since it is only 6/100, which is rather inconsistent compared to his son’s good scores in the past.

The video on Weibo went viral, and numerous netizens expressed their sympathy toward the crying father. Most of them claim that it is not easy being a parent nowadays. Some also pointed out that the father may be teaching Mathematics to the child from his perspective instead of his son’s, hence, confusing the child while solving in class.

According to 8world News, some people claim that the father’s late-night tutoring may have affected his son’s focus in school since he may be too tired and sleepy during class.

Nevertheless, it was evident that the father was disappointed since he did his best in helping his son through his Mathematics classes. No one said that being a parent would be easy. We can just do so much for our children.

Sadly, some students reveal that even through long hours of studying and reviewing for exams, it still does not guarantee high scores. Professors and exams are often candid, and sometimes you may fail simply by not following the instructions on the test papers.

While the father feels that his hard work was for nothing, his son may have appreciated his help, and his efforts will be remembered while he grows up. Always see it through your child’s perspective, too. After all, the failure may have also affected them.

In as much as we want to help our children with their school work, we should support the knowledge they acquired from their teachers, too. It also brings such pleasure to see our children bring home high scores from their exams. In that way, we realize that they do pay attention in class. Let the teachers do the teaching. We, the parents, are here to support our children’s mode of learning in school. They can do it.

Parents, do not feel that this is the end of the road. Keep supporting your child in all ways possible. These are the times they need us the most. Trust the teachers in molding the children’s minds with knowledge. Our kids need the boost from us.