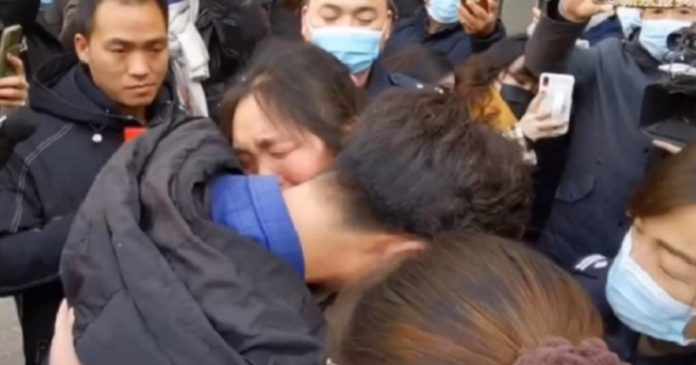 It was a very emotional reunion for a man named Li Jingwei and his family after 30 years. A map he remembered during his childhood years was so vivid that he was able to draw the exact place where his family lived in China. He was a victim of a child trafficking ring when he was only 4 years old.

According to The Guardian, 37-year-old Li Jingwei, now a father, was abducted by his neighbor in China’s Yunnan province when he was only 4 years old. He was taken to another family in Lankao, where he was raised, which is about 1100 km. away.

On December 24 last year, Li resorted to Douyin, globally known as TikTok, and showed a map of his home village that he drew from his memory, in hopes that he would find his family that he had been abducted from in 1989. After 33 years, he is finally reunited with his family, thanks to the map he drew.

On Saturday, January 1, 2022, Li Jingwei was reunited with his family after DNA tests confirmed that he was the woman’s long-lost son. The emotional reunion occurred outside of Henan police station.

Li recalled that he repeatedly drew his hometown until all the vivid memories returned. “I knew the trees, stones, cows, and even which roads turn and where the water flows,” Jingwei told the Chinese news outlet, The Paper.

Unable to recall the name of his hometown or his address, he drew certain elements he remembered such as, a school, a bamboo forest, and a pond. Luckily, a police officer chanced upon the photo online and compared the map to Yunnan, where he heard the news of a woman who was searching for her missing son.

The mother and her son were able to have a conversation online days before the reunion. Li told The Paper: “My mother cried as soon as I got on the phone. After the video call, I recognized her at a glance. My mother and I have the same lips, even my teeth.”

Li recalled that he was abducted by a bald man. The man tricked him by offering him candy and mentioning that he was a new neighbor who recently transferred to their village. However, the family who adopted Li treated him well and raised him properly. They instilled in him very good principles in life and to “study well and become an asset in the future.”

To this day, child abductions are still common in China. Li was probably taken since the adoptive family wanted a boy. He found an inspiration to search for his family, that of Guo Gangtang, who searched for his missing son riding his motorbike and traveling more than 300,000 miles. He successfully reunited with his son after 24 years.

“When I saw the story of Guo Gangtang, I thought to myself: I should try to find my biological parents … I wanted to see them when they are still alive,” Li said and wrote on his Douyin profile before the reunion. “Thirty-three years of waiting, countless nights of yearning, and finally a map hand-drawn from memory, this is the moment of perfect release after 13 days. Thank you to everyone who helped me reunite with my family.”