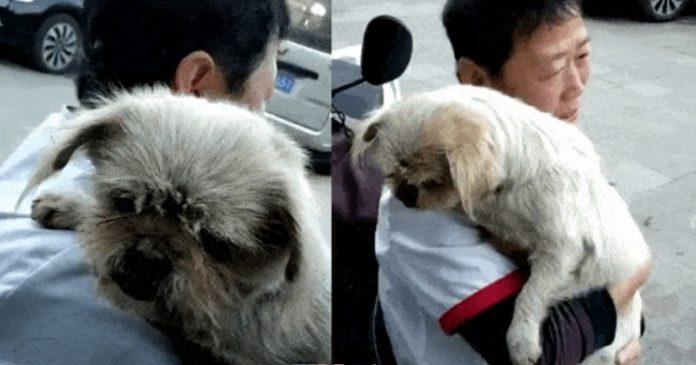 It is such a good feeling to hug your fur-baby that was lost for a long time, just like when a long-lost relative has been found and is back together with the family. Luckily, a woman in Qingdao, China, reunited with her dog, which she lost 8 years ago.

Aunt Gao raised a dog, not a pure breed, but a domestic, local dog she named Dudou. Since Aunt Gao lived alone, she considered Dudou her best friend. They eat meals together and sleep on the same bed. They had a good relationship. Dudou waits for her when Aunt Gao goes to work on weekdays, then waits at the door for her when she comes home.

One day, Aunt Gao’s mother fell ill. She had to go back to her hometown to tend to her sick elderly mother. Due to the long-distance travel, Aunt Gao could not take Dudou with her. She did not want the dog to be left alone at home, so she thought that the best alternative was to tentatively leave Dudou with her neighbor.

The neighbor said: “I am not much into pets, so I wanted her to return right away and take the dog back.”

Aunt Gao returned home a year later and immediately headed to her neighbor’s house where she left her beloved dog, Dudou. She was shocked to discover that the house was empty and the neighbor had moved out. Aunt Gao asked the other neighbors for information on where the family had transferred but to no avail. No one knew where the previous family had gone. Aunt Gao broke into tears, thinking she may never see her best friend again, and utter sadness filled her heart. Earlier, while traveling back home, she was excited to see her fur-baby Dudou again.

Aunt Gao did not give up. She went around the neighborhood and asked the surrounding establishments if a dog was left by the previous owners of the empty house or if they had information on where they had moved. Alas, nobody had given any details. After several more days of questioning people who lived in the neighborhood, there was still no success. Finally, Aunt Gao gave up. She wanted to raise another dog, but she could not get Dudou out of her mind without feeling pain in her heart. She was missing Dudou very much.

Time flew quickly, and Aunt Gao had managed to return to her usual routines. 8 years have passed, and she still has not forgotten her beloved Dudou. One day, Aunt Gao went to the grocery. She suddenly crossed paths with something familiar, a white and yellow colored tiny dog with short legs that looked exactly like Dudou. Aunt Gao thought, “Could this be…?” Without hesitating, Aunt Gao called out its name. “Dodou!” The canine immediately ran to her, and Aunt Gao picked up the dog.

Aunt Gao could not help shedding tears when she saw Dudou’s dirty body and knotted fur. She could only imagine what the dog had been through for 8 years living in the streets. Aunt Gao was also wondering if Dudou was trying to find its way home to her but lost its path. This day led both of them on the right path, and after 8 years, they have finally reunited!

Aunt Gao still recognized Dudou after 8 years. Dogs grow old faster than humans, and that day, Dudou was considered an elderly dog. People who have witnessed the reunion between Aunt Gao and Dudou had mixed emotions. No matter how long they are separated, a dog always remembers its owner.