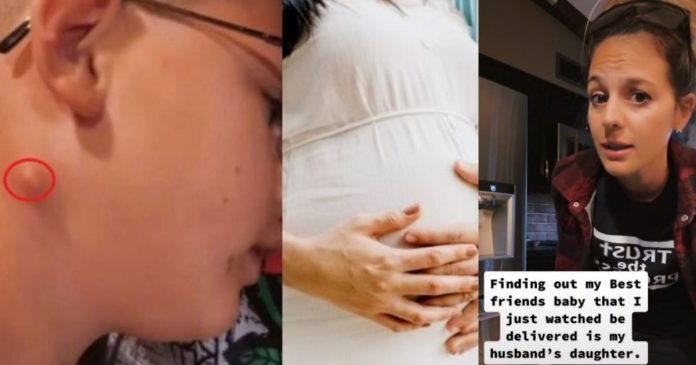 It was the most touching experience for a woman when she accompanied her pregnant best friend to the hospital and witnessed her child’s birth. Her happiness turned into a nightmare when she discovered a birthmark on her best friend’s daughter that was very similar to the one her son has. Birthmarks are genetic, that’s when she learned that her husband has cheated.

TikTok user Hailey Mae, a mother of four, was invited by her pregnant best friend to witness her child’s birth. It was the most memorable and happiest moment for both women. After a few days, Hailey saw a hereditary birthmark on the newborn baby’s neck, similar to the one her own son has. Later, she discovered through her best friend that her husband cheated.

Taking to TikTok, Hailey said: “When she was in labour, she called me, and I drove her to the hospital. I was with her when she got an epidural. I wore the daddy wristband, and I gave the baby her first bath. It was a beautiful experience, right? I will never forget it. I was just happy to be a part of it. Unfortunately, three days later, I saw the hereditary birthmark, which I’m very familiar with because my oldest son has it. It’s an extra piece of cartilage that grows outside the neck, so he looks like a little Frankenstein baby.”

Recalling that certain moment, she said: “Several of his other children have it as well, so I knew exactly that the baby was my husband’s at the time. She was standing next to me when I was changing the baby. That’s when we both saw the birthmark.”

Hailey’s best friend did not deny that she slept with her husband. “We looked at each other, and I had to step outside – I needed a moment to think what I should do in this situation.”

“She did admit it right away, but it wasn’t until six, seven months later my ex-husband did admit that they had been sleeping together, and there were several other women, too,” Hailey said.

After some time, Hailey decided to divorce her now ex-husband and left the town with her children for good. Her best friend and she remained on good terms. “At the end of the day, her daughter is still my children’s sister”.