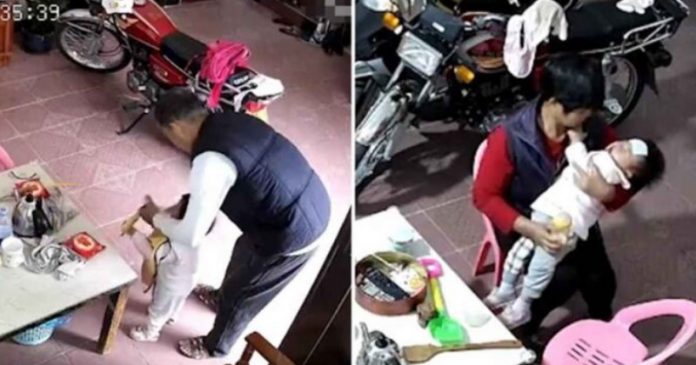 It is customary for parents to pass down their lineage to firstborn sons, and even to sons born after the eldest. Only by having male offspring can the blood of the family be passed down from generation to generation. Though as years passed, generations have evolved into more modern views, with gender equality becoming acceptable to the public.

On January 16, 2022, a woman felt that she has disappointed her father-in-law by giving birth to a daughter. However, when she came home from work and checked the CCTV camera, her heart felt like it has been squeezed.

Her father-in-law has expressed dislike for daughters being born into the family, and since she gave birth to a girl, this made her feel sad. After all, the female infant was his own flesh and blood. Upon hearing what her father-in-law said, she felt hurt and angry with him.

The woman had no choice but to leave her daughter under the care of her grandparents since she has to leave on weekdays to go to work. When she came home late that afternoon and checked the CCTV camera, what she witnessed melted her heart.

The video showed the baby’s grandfather gently placing an apron on the little girl while she eats.

When her baby is playing outside with another child, her grandfather follows her close by for fear that she may fall and get hurt while playing.

On days when the baby was sick, her grandparents took good care of the baby. Even when the grandfather is busy using his mobile phone and the baby is playing with her toys, he would protect her by holding on to her with one hand to prevent her from falling.

The clips that the woman witnessed on the CCTV camera were enough to touch her heart.

By this time, the woman realized that although her father-in-law expressed dislike for not having a grandson, his heart is still full of love for his granddaughter.

The photos have caused various reactions and heated discussions from netizens. Some of them felt that his true feelings are civilized and the little girl is cute and funny.

No matter how strict customs and cultures may be, parents and grandparents will still love the new generations that are born into their family. From high-profile to working-class families, grandchildren are still the children of their children, and they look after their own.

There was a netizen who shared a story about an elderly man who lived near his house. When his first grandson was born, he was not pleased with having children around. Though when his grandson grew up getting cuter, it touched his heart, and became fond of him. He can be seen hugging his cute grandson a lot. He would often compliment his grandson when they got together.

Nowadays, very few people still hold on to the ancient concept of having male firstborns carry on their bloodline for generations to come. In these modern times, both male and female offspring are devoted to their parents, and in return, they are proud of what the children have become, especially when they are guided well while growing up.

Although most parents prefer girls since they are more refined, they become more strict with them during their teenage years.

Earlier this year, footage went viral on the internet showing a man who was waiting anxiously outside the delivery room as his wife gave birth. Although it was anticipated that they were going to have twin boys, the process still worried him.

When the doctor came out of the delivery room, he immediately ran to her.

Upon hearing that his wife gave birth to twin girls, his reaction took a full turn. After his mild “shock,” he danced in the hospital corridor. The people who saw him laughed for joy.

Every child is a miracle to all parents. They are the future of every family’s legacy. People have realized that a child’s gender is no longer a big deal. The most important matter is how they are raised, and should be provided guidance and care so that they can grow up healthy and happy, and pass on their family’s bloodline.