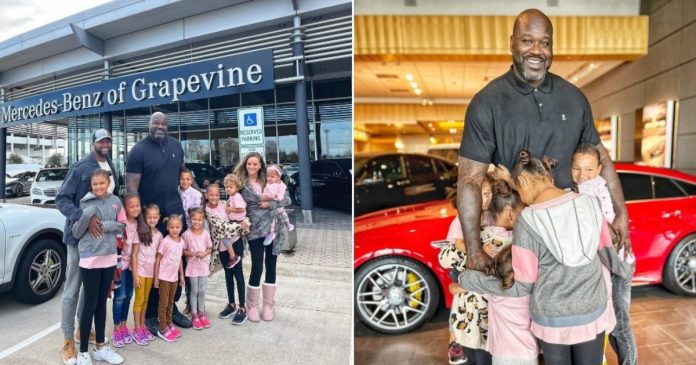 Apart from being one of the best basketball players in history, 7’1″ NBA legend Shaquille O’Neal is well-known for his generosity. He does not need a further introduction since he is famous all over the world. Kind-hearted and good-natured Shaq never hesitates to help the needy and likes giving back to society as much as he can. He has been an inspiration to all, not only through his sportsmanship but also through his generosity to everyone.

Shaquille O’Neal is one of the highest-paid NBA players, with a Net Worth of $400 million. He is on the list of the top 20 richest athletes in the world. While in retirement, he is reaping the benefits he deserved from his wise business decisions and investments.

Not only is Shaquille a great basketball player and a wise investor, but also an angel for his generosity to give back to the community and help people in need. His charitable nature is known to all citizens. In February, a family of 11 encountered Shaquille’s generosity when he gave them a day they will cherish for a lifetime.

Karissa Collins has an Instagram account called The Collins Kids. She has shared photos and videos of her family, her 9 children, and expecting her 10th child. Karissa has revealed how Shaquille has changed the life of her family on that fateful day in February.

As Shaquille took the family of 11 out for dinner, they passed a Mercedes showroom and bought them a new 15-passenger van. The 12-passenger van of the Collins family had issues with the air conditioning and planned to trade in their old van since it was no longer adequate for their growing family. “They didn’t have any in stock, and so we got to customize and order a van that should be here in July,” Karissa said.

As soon as the deal was done, Shaquille took the family out to dinner at Babe’s Chicken Dinner House. After paying for dinner, Shaquille gave the waitress a tip of $1,000 when he discovered that her car broke down.

When Shaquille learned that the family’s van was having issues one way or another, he brought them to a Ford dealership and bought them a second van.

According to Fadeaway World, Karissa and her family thanked Shaquille for his overwhelming gesture and time he spent with her children. She was very grateful for the generosity that Shaquille has given them.

“Somebody wake me up because I must be dreaming. Thank you, Shaq, times a million times!!! You have been such a blessing to us in so many ways. I have no words right now!!!” Karissa said and continued, “Today, Shaq blessed us like never before. Last night we had a surprise visit from Shaq. He took us to dinner as a family at Babe’s Chicken. It was so much fun to just hang out and eat dinner with him. He started the day off by taking us to the Mercedes-Benz dealership to get us a new family 15 passenger van.”

Other citizens have also shared their experiences of Shaquille’s bountiful kindness on various occasions. Shaquille revealed that he wanted to help someone in need every time he leaves his house. One incident was when he bought a new bicycle for a small boy. He also bought two pairs of shoes for a young boy whose parents could not afford to pay for a new pair of shoes. He is also known to give a sizable amount of tips to servers in restaurants.

Shaquille O’Neal is truly an inspiration to us all. His unwavering choice to give back to society is unmatched and amazes people around the world. He is the perfect epitome to follow and remind others to pay it forward. Let us all make this world a better place.

A 91-year-old Man in China Gives Free Classes to Kids in...

Parents Beware: Be Firm in Handling Your Kids When They Throw...