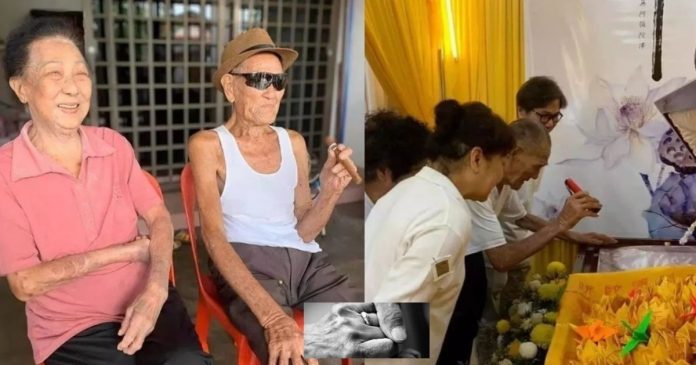 It is rare to hear about a couple who has been in love since their childhood days. They married and became lifelong partners until they were almost a century old. Grandma died at the age of 93 due to an illness, and her 94-year-old husband whose eyesight was already deteriorating had to use a flashlight to look at her for the last time.

The grandfather silently grieves as his wife leaves the world. Every touching photo is an emotional story behind it, may it be a story between teachers and students, husband and wife, or close friends. People tend to imagine the real story behind every photo. Then whatever they conceive from it, the truth lies not far behind, and the tears follow.

Love sees no borders. From faraway Africa to Malaysia, there is a unique love story that circles a couple everywhere in the world. 94-year-old Grandpa Chen and 93-year-old Grandma Jiang knew each other since they were children. At a young age, they knew they were already in love with one another. At age 16, Grandpa Chen already saw Grandma Jiang as his lifelong partner.

According to Qimo News reports, the elderly couple’s granddaughter said that Grandma and Grandpa were childhood sweethearts until they reached adulthood. The two eventually married, though they did not have a wedding ring. The sweetest thing was that Grandpa Chen gave Grandma Jiang a bracelet, and she did not complain. Since she was young until her hair turned gray, Grandma Jiang liked to wear light make-up and dress up nicely whenever she went out. Grandpa Chen would wear a vest and ride the bike carrying Grandma Jiang with him. They are always the envy of people who see them pass by.

Grandma Jiang suddenly became ill and became worse in February. Knowing her time was running out, she requested her family to call Grandpa Chen into the room. He stared at his dying wife with tears in his eyes and promised her that she will always be in his heart until the day he passes away. The family held a farewell ceremony for Grandma Jiang. Alas, Grandpa Chen had poor eyesight and had to use a flashlight to view his wife clearly in the coffin. Although he mourned silently, everyone who witnessed the heartbreaking moment burst into tears.

When Grandma Jiang started getting sick, many illnesses followed. Due to her old age, she developed many problems with her body and was admitted to the hospital twice. Even after she was discharged, she was not as strong as before. She was always in bed and feeling weak. Grandpa Chen stayed with her by the bed and snapped some jokes to cheer her up. However, their sincerity for one another did not heal her. In the end, Grandma Jiang passed.

After his wife passed, Grandpa Chen spoke less. At the funeral, no matter how heartbroken he was, Grandpa Chen did not show it deliberately. He did not want the children to see him sad for they may feel the same. Although his children took care of the funeral and the expenses, at the moment of the last farewell for Grandma Jiang, Grandpa Chen still came to the wake.

When the day of the burial came, Grandpa Chen said: “I don’t want Grandma Jiang to come back because the journey is long.”

Unfortunately, due to his old age, Grandpa Chen’s eyesight was already deteriorating, and could no longer see clearly. During the memorial day for Grandma Jiang, he brought a flashlight. He hopes to see her better when he shines his flashlight on her. Grandpa Chen said: “For 78 years we were together, I haven’t scolded her, and she is still beautiful.”

One day at the funeral, the granddaughter said that her grandfather kept looking at his watch. It seemed that he did not want to send his wife away immediately. When the funeral was over, she saw her grandfather silently smoking a cigarette, then he wandered around the entrance of the house, then looked up at the sky. When he entered the house, he closed all the doors and the curtains. In the end, the grandchildren made a vow to their Grandma Jiang that they would take good care of Grandpa Chen. The granddaughter emotionally said, “This is the most beautiful love story I have ever encountered!”

Young Girl Almost Died of Peanut Allergy when a Passenger on...