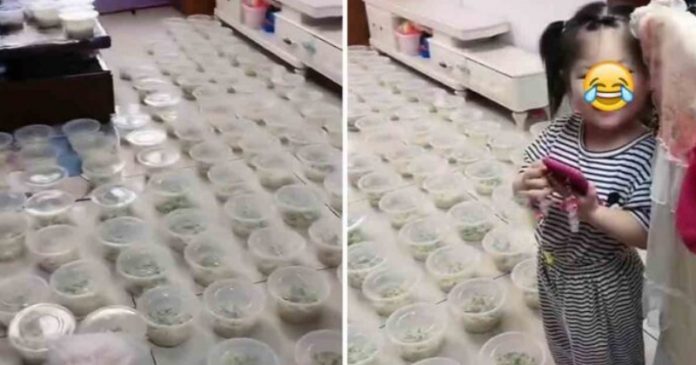 Smartphones have become the norm nowadays around the world. Not only do adults use them either for business or for pleasure, but many children have also been learning how to use them for games. Since parents assume that children as young as 3-years-old use smartphones only for their games, they are confident to lend them their own phones.

Children tend to do many things on mobile phones. Unknowingly, they can press the wrong button and may even send various emojis to contacts online. The following story is a perfect example of an embarrassing incident that a little girl did while using her father’s mobile phone.

A few days ago, a 3-year-old girl used her father’s smartphone and ordered 100 bowls of noodles just because she was hungry. The crew of the restaurant was confused, though he sent them anyway.

The delivery man repeatedly went up and down the 13th floor to deliver the noodles non-stop until the last bowl. When he was done, he looked at all the bowls of noodles the little girl ordered and gasped, “Why did they order so many noodles?”

The little girl’s father noticed that a delivery man was bringing noodles into the building. He was unaware that it was his daughter who ordered all the noodles being delivered.

The father had to put the bowls of noodles onto the floor. Seeing the unbelievable sight, he wondered: “There are only four adults in the family, the grandparents, my wife, and I. Even if we all eat three bowls of noodles per meal, this won’t be consumed!”

The father came up with an idea. He left 8 bowls of noodles in his house, then the other 92 bowls were distributed among all the building’s cleaning staff. This way, there are no noodles thrown away or returned to the restaurant.

Then the father turned to his 3-year-old daughter, who caused the mischief. Although he did not scold her, he curiously asked why she ordered too many noodles, and she replied: “I’m hungry.”

The girl’s father smiled awkwardly and said that from then on, he would keep his mobile phone with him all the time.

As soon as the incident went viral, netizens praised the father’s calm behavior. Although he knew that his child did mischief, his reaction was commendable since the extra bowls of noodles were shared with other people at no extra cost!

With the family’s calm behavior and educated approach to sudden incidences caused by a child, there is no doubt that she will be raised to be a caring and understanding person, and she will carry these traits for generations to come.