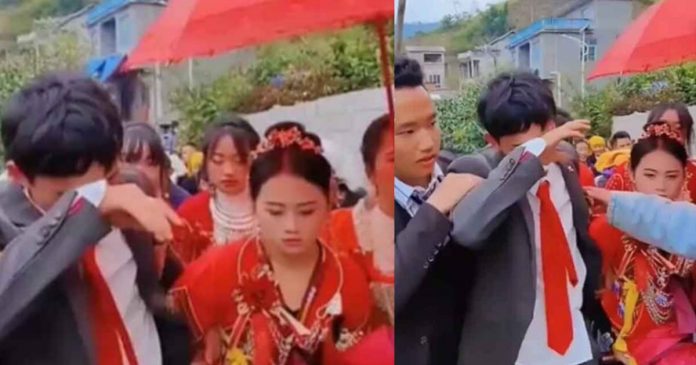 Traditionally, when a man and a woman marry, the bride would stay in her husband’s house. Although some grooms stay in their wife’s houses, their reasons vary.

Recently, a groom was reluctant to live in his wife’s home. When his bride came to pick him up from his house, he showed no interest and cried. The young man was good-looking, elegant, tall, and somewhat lanky. Every young woman would inevitably fall for him.

On the other hand, the bride seems to be in good spirits. After they married, she planned to invite the groom to stay in her home.

While they were on their way, the groom cried all the way and kept muttering that this was not the way he wanted to live with his wife. Although the bride saw that the groom was unhappy, she felt sadness for him, too, and the wedding still pushed through.

The woman was happy to be a daughter-in-law, but she decided that the groom would stay in her home after they marry. If the groom was independent enough, he would not rely on anyone but himself and build a future for himself and his bride without the help of his in-laws.

After the incident was posted on the internet, some netizens were touched by the groom’s reason for being reluctant to stay in his bride’s home.

If they had not much money, becoming a son-in-law and living in his wife’s house can indeed save a lot of expenses.

Now that the groom came to terms with living with his bride, he realized that his wife really loved him and respected his decisions, too. If the couple works together and becomes rich in the future, there is a strong possibility that they can buy their own house and build a home for their own family.

Man gives his boss an epic “Sorry For Your Loss” condolence...