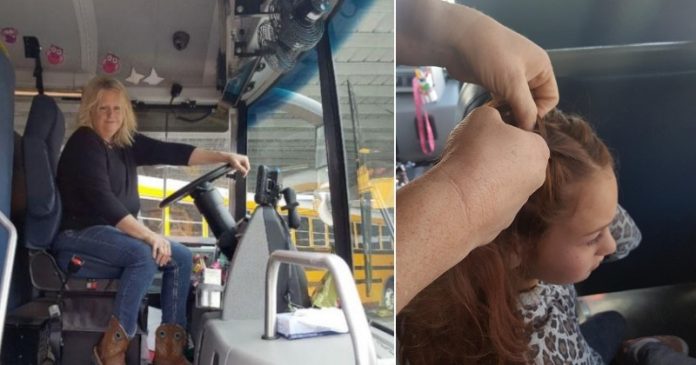 Sometimes, an unexpected contribution can do wonders to a simple thing that still needs to grow. A young female student goes to school with a messy ponytail every day since her father could not fix the little girl’s hair. Fortunately, a female bus driver stepped in to help.

In 2018, Tracy Dean, a female bus driver noticed that 11-year-old Isabella Pieri’s hair was always in a messy ponytail every time she heads for school. The ponytail looked like it was only pulled up without brushing her hair. Tracy finally had the courage to ask Isabella. It turned out that Isabella’s mother has passed for 2 years, and the young girl had no one to ask for help except for her father, who admit that he did not do a good job fixing her hair. Isabella had to learn how to tie her hair in a ponytail, though most of the time, it was unsuccessful.

“It would get so tangled up — I didn’t know how to take care of it,” Isabella’s father, Philip Pieri told TODAY Style over the phone. “And then, finally, she got mad at me and wouldn’t let me touch her hair anymore, so I said, ‘The only way we’re gonna get that big of a mess out of it is just to cut it all off and start all over again.’ I don’t know how to take care of long hair, so I kept telling her either you’ve got to comb it out or we’ve got to cut it short,” he said, noting that it would wind up in tangles when it grew longer. “It’s an ongoing issue for probably the past couple of years back and forth.”

Tracy could not bear seeing Isabella with her messy ponytail, so an idea came to her and hoped that the little girl would agree. She wanted to offer to braid her hair every morning before she goes to school.

“I didn’t want to hurt her feelings because she just got out of bed and pulled her hair back into a ponytail, but I wanted to pull her aside and say, ‘Hey, let’s brush your hair out,’” Tracy told TODAY Style. “But I didn’t know how to do it without hurting her feelings.”

“Isabella just said, ‘Hey, will you do mine if I bring a brush?’” Dean recalled. “And I was just thinking to myself, ‘Oh thank you, Lord.’”

Isabella takes the same bus daily to school and whenever Tracy had free time, she would help Isabella with her hair. “I usually help her tie two braids, and occasionally she asks me to tie one, and I teach her how to tie her own hair.”

Isabella is impressed by how Tracy has fixed her hair into different styles of braids. The 11-year-old said, “It made me feel like she was my mom. I’m looking forward to what she’ll fix my hair into the next day.”

Isabella’s father, Philip Pieri, mentioned that his wife, Patricia Pieri, died of a rare brain disease 2 years ago. Although Isabella was quite young when her mother passed, she learned how to take good care of herself with some help from her father.

47-year-old Philip works in a convenient store for several hours daily. After his wife passed, he did his best to take over fixing Isabella’s hair the same way his wife does. He was unsuccessful and suggested to Isabella to have a haircut, and she was not pleased with the outcome. Since then, when her hair grew long enough, Isabella would make the effort to tie her hair into a messy ponytail.

Since Tracy had started helping Isabella with her hair, she and her father felt quite a relief. Tracy said that it was just a small effort to braid Isabella’s hair every morning. She and Isabella had a similar situation when Tracy, a mother of 4 children, was diagnosed with cancer seven years ago.

“Your life sort of flashes before your eyes when your doctor tells you you have cancer,” she said, pausing for a moment to hold back tears. “Everything runs through your head with your kids … I wondered who was going to help? My youngest daughter was in sixth grade, and so I wondered, who was going to do her hair? Because I didn’t know if I was going to live or die.”

When Tracy learned that Isabella lost her mother at a young age, braiding her hair to make her look beautiful when going to her school was the least she could do for her.

“My mother taught me this way since I was a child, that I have to be kind to everyone around me, especially those who need care.” When Tracy saw Isabella, she especially wanted to care for children like her, “I Love making all kids feel loved, especially strong kids.”

“I was nervous, but I was also happy at the exact same time,” Isabella said of the first time she approached her bus driver for her help. “I was nervous because Tracy and I didn’t really know very much about each other, but now we’re best friends forever and ever.”

Although braiding Isabella’s hair was just a small gesture, it meant so much to her, knowing that she had made a (best) friend and felt like she had a new mother, too.

An Old Cow Kicked an Elderly Man on the Chest Even...