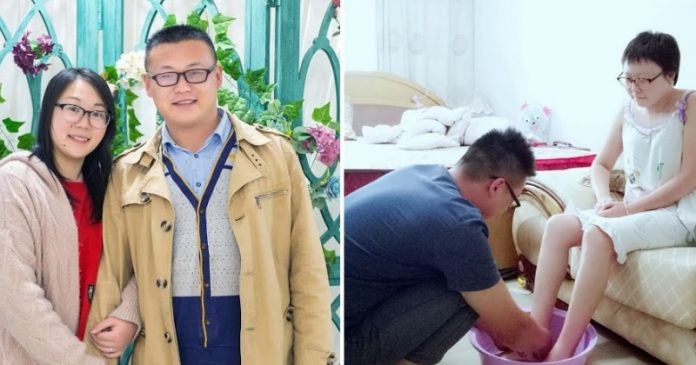 True love can be unconditional. Couples who love one another go the extra mile to help the other in need. Most of them don’t give up no matter how difficult situations can be for both persons. The following story is a perfect example of true love.

22-year-old Zhang Xiaoyu was a college student in Bengbu, Anhui, province of China, 10 years ago. Her boyfriend, Zhang Jiafeng, graduated a year earlier and has immediately found a job. They were dating for a year, with so many plans for their future. Unexpectedly, Xiaoyu has been diagnosed with Hydrocephalus, a buildup of fluid in the cavities (ventricles) deep within the brain. She has undergone an emergency operation, however, she became paralyzed and fell into a coma.

To make matters worse, the doctor informed Jiafeng that it is uncertain when Xiaoyu would wake up. He was not ready to give up on the love of his life, so he decided to take care of Xiaoyu. He knew that tending to a paralyzed person is never easy. Lung infection and malnutrition can be fatal if the person is not closely monitored. Jiafeng said: “When we fell in love, we had so many plans after we get married soon. I am not going to give up now. No matter what, I will be good to her and must accompany her.”

Jiafeng’s parents agreed that he is mature enough to make his own decisions and respected all of what he chose for his future. However, Xiaoyu’s parents felt guilty. Jiafeng is only in his early 20s and has a bright future ahead. Their daughter is not yet married to him, and they feel that it is wrong to drag him down with this situation. Jiafeng disagreed with this and said that as long as Xiaoyu is still breathing, he will never let go of her.

Every morning at 6:00, Jiafeng helps Xiaoyu clean up and changes her diapers. He then prepares her liquid breakfast, carefully feeds her via a tube inserted through her nose, then massages her legs and feet. Xiaoyu’s family is busy. Her father goes to work daily, her mother is not in good health, and her younger brother had to go to school. Hence, Jiafeng took the initiative to tend to Xiaoyu. He has set more than a dozen alarms a day on his mobile phone. “Every 2 hours, I help her turn over, then I try not to let her lie flat on her back.”

After doing some miscellaneous housework, Jiafeng would sit by her bedside and chat with Xiaoyu, and sometimes even sing to her. He always hoped that one day, the love of his life would awake. After almost 500 days, a miracle happened! Xiaoyu started moving. Jiafeng was overjoyed and said, “I feel so excited! After so long, the thorn in my heart finally fell off. I feel so relieved!”

When she finally awoke, Xiaoyu weakly said, “I saw him when I opened my eyes, and I called his name very softly.” For almost 2 years, Xiaoyu was in a coma, her weight has dropped to 30 kilograms, and her memory was very weak. She had a lot of recovering to do, and slowly, though Jiafeng was full of hope. He felt that the worst was over. Jiafeng also believed that, together, they will definitely survive the rehabilitation process that Xiaoyu will have to undergo.

After years of hard work at rehab, in 2011, Xiaoyu was able to stand and walk. They finally married in 2012, and although it was not a grand ceremony, it was a heartwarming event with family and close friends. After the wedding, Xiaoyu had to undergo Brain Shunt Surgery, a procedure wherein a hollow tube surgically is placed in the brain (or occasionally in the spine) to help drain cerebrospinal fluid and redirect it to another location in the body where it can be re-absorbed. The medical expenses were stressful, though Jiafeng resumed his work and earned enough money for the surgery. Although he did not earn much, Jiafeng was willing to help with the finances.

Xiaoyu said: “He is very stingy with himself, but he is very kind to me. He will buy me whatever I want.” Jiafeng responded: “Of course, my girl has to dress up when she goes out, beautiful clothes for me are unnecessary. I gave her too little, and I always feel that I owe her. I haven’t given her a real home, we don’t even have a house.” Although Xiaoyu kept assuring Jiafeng: “Those are not important. The two of us, what’s more, important is that we are together!”

After the story of Jiafeng and Xiaoyu was shared by the media, many netizens wanted to make donations and share some money for their expenses, but the couple refused. They admit that their income is not big, though they can support themselves and live a happy life. The couple is active members of a local volunteer association and often participate in charities and public welfare activities to help others. Jiafeng and Xiaoyu are not a wealthy couple, but they are rich in people who love and trust them, and they are willing to pass on more love to touch everyone’s hearts! ❤️