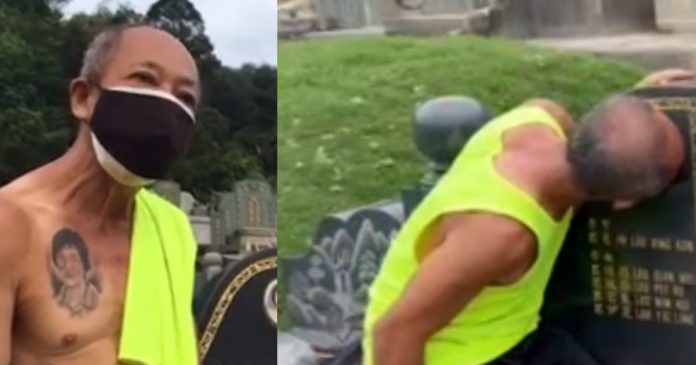 The most heartwarming and touching gesture a man can offer his deceased wife is to come and visit her often at her resting place. Too much, as it may seem, but not for a devoted husband in China, who visited his deceased wife every morning for 7 years. It was the least he could do to honor her memory.

62-year-old Lu Kai’en is a retired crane operator. His wife, Lin Yunmin, has passed at the age of 52, 7 years ago. Since then, he visited her daily at 7:00 in the morning, rain or shine.

“For the past 7 years, I have come here every morning around 7 o’clock to visit my wife. I would pack her favorite black coffee and some food, and linger here for about two hours, wiping down the tombstone while chatting with her.”

During an English-language interview with a Star news reporter at Penang’s Joint Fujian Gongzuka on April 5, he mentioned that when the weather was cool at night, he would jog from his home in Batu Lanzhang to the cemetery.

“The round trip is about 15 kilometers,” he recalls. “If it rains in the morning, I’ll wait for the rain to stop before coming over. But every time before leaving, I would kiss her picture on the tombstone.”

Fondly remembering the day the couple met, Lu Kai’en said that they met through his father-in-law. He remembered that they were in love and in a relationship for 6 years before they got married.

“My father-in-law was my friend, and I ran to their house as soon as I had time, and my mother-in-law became our matchmaker. We were both first loves for each other. I met her when I was 22, and she was 18. My wife is a very kind, simple, and selfless person. We never quarreled, mainly because she had a gentle personality and was very communicative. I’m grateful that she has accompanied me through the ups and downs of my life. She was my backbone, and she understood me perfectly.”

Mr. Lu admits that he has not missed visiting her at the cemetery even for a day since she has passed. He also mentioned that he always brings the 3 most important things during his visits: a pair of scissors to cut grass, a portable speaker that could play Buddhist scriptures, and some paper products in memory of his wife.

Lin Yunmin is the Deputy Principal at a Primary School before her passing and loved to help those in need. She has served in charities everywhere around the world.

“She is a loving mother of our five children. She took good care of our children and taught them to be disciplined and independent.”

“I didn’t forget to bring her favorite coffee. I would also wipe her grave regularly. It’s become a habit for me, and I feel uneasy if I don’t come to see her.”

In memory of his loving wife, he had her portrait tattooed on his chest.

“I decided to get the tattoo done about 3 years ago so she would be with me wherever I went. It took the tattoo artist about a day to complete it, and the process was painful.”

Since his wife passed on Christmas Day in 2015, the holiday has been a bittersweet day for him.

“We were married on December 25, 1988, and her funeral took place on the same day in 2015. Christmas is a happy day for me, but also a sad day.” Mr. Lu said emotionally. “She died of leukemia at the age of 52. When she was being treated, I was in the hospital every night with her. She was only two months from her diagnosis to her death, which caught me off guard, everything happened so quickly, but I was thankful she didn’t suffer too much.”

Mr. Lu admits that he still dreams of his wife.

“I will continue to go to my wife’s grave every day until I can’t walk.”

A Father-in-Law Packed Up Leftover Food from the Engagement Party; The...