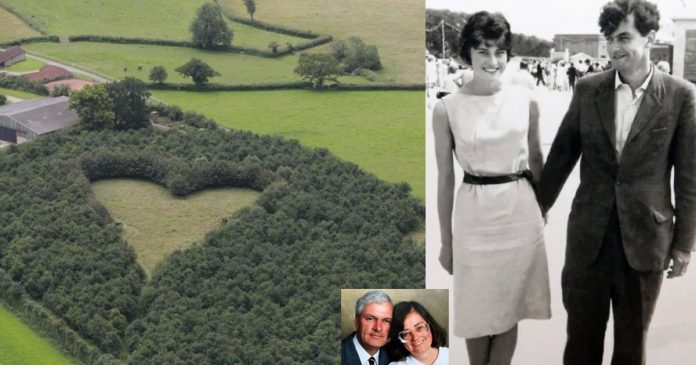 “Love is higher than a mountain; Love is thicker than water.” These are the highlights of a famous song in the ’70s that (probably) most couples believe in. Lucky are the people who find their soulmates and live happily ever after. Believe it or not, there are couples whose love for each other is strong that even death can never destroy the bond.

An elderly farmer, Winston Howes in England, and his wife Janet lived a happy married life for 33 years until her tragic death at age 50. Unfortunately, Janet passed away due to a heart attack. Winston loved Janet very deeply that he planted 6,000 saplings on a 112-acre site in Gloucestershire. It was not until 17 years later has someone discovered that there was something “hidden” on the site.

▼Winston and Janet married in 1962, and they lived happily. In 1995, Janet died due to a heart attack at the age of 50. In tribute to her, he planted 6,000 saplings that grew into oak trees in a forest and kept an open space believed to be heart-shaped with its tip pointed to his wife’s hometown of Wotton Hill.

▼The heart-shaped meadow in the middle of a forest is where Winston often stay, sitting on the grass and quietly reminiscing their lives together. Winston has planted Janet’s favorite flowers, Daffodils, in the clearing, which blooms in spring and makes the view even more memorable to him.

Winston said: “I came up with the idea of creating a heart in the clearing of the field after Janet died. I thought it was a great idea – it was a flash of inspiration – and I planted several thousand oak trees. Once it was completed we put a seat in the field, overlooking the hill near where she used to live. I sometimes go down there, just to sit and think about things. It is a lovely and lasting tribute to her which will be here for years.”

Winston added: “We got people in especially to do it – there are several thousand trees. We planted large oak trees around the edge of the heart then decided to put a hedge around it too. We plant daffodils in the middle that come up in the spring – it looks great. I go out there from time to time and sit in the seat I created.”

▼The beautiful but mysterious heart-shaped meadow stayed hidden from the outside world, which served as a “sacred” place for Winston. Come 2012, a man named Andy Collett flew in a hot air balloon and chanced upon the meadow, accidentally discovering the hidden heart-shaped clearing. He did not hesitate to take some photographs of the beautiful scenery.

He was amazed and said: “I have my own balloon and am quite a regular flyer, but this was the most amazing sight I have ever seen from the sky. It was a perfect heart hidden away from view – you would not know it was there. You can just imagine the love story.”

One day, Winston himself flew a plane overlooking the meadow. He thought that this was the best way to pay tribute to his wife, who has been long since gone. Seeing the heart-shaped meadow, Winston will always love Janet very deeply and will definitely keep her in his heart!

A love to last beyond a lifetime. ❤️

A Dementia Old Woman Married a Man without the Consent of...