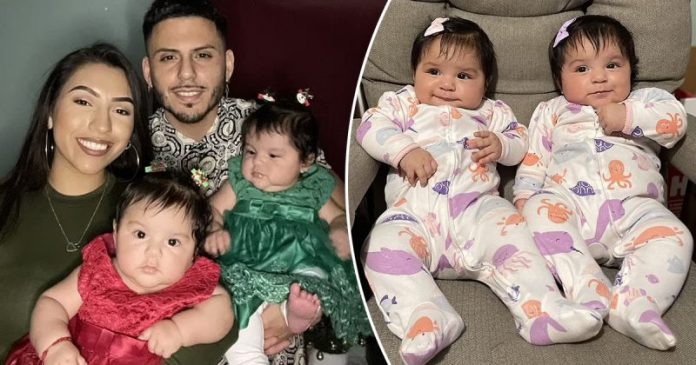 A woman from San Pablo, California, revealed how she got pregnant for the second time 5 days after she was confirmed pregnant with her first baby.

An article posted at Daily Mail UK shared how a 25-year-old woman was informed of her pregnancy after her first ultrasound was done, and was pregnant with 2 babies. The results revealed that the babies were conceived on 2 different days but the same week.

Before learning that she was pregnant with a second baby, the couple, Odalis and Antonio Martinez admitted that they were happy to find out that in November 2020, the woman was pregnant again. A few months before, they experienced a miscarriage and felt very disappointed.

“While doing the first ultrasound, the doctor told me that she had found another baby that also had a heartbeat,” Odalis said. “I was just crying with happiness. I felt like the first baby that we had lost was in the room with me and saying it was going to be ok. When you go to the first ultrasound, they check everything, and around the day that you actually conceived the baby, and that’s when she told me that they were conceived five days apart, which I didn’t even know could happen.”

This unusual incident is known as Superfetation. According to HealthLine, Superfetation is when a second, new pregnancy occurs during an initial pregnancy. Another ovum (egg) is fertilized by sperm and implanted in the womb days or weeks later than the first one. Babies born from superfetation are often considered twins since they may be born on the same day.

The couple’s children were born on the same day and look alike, although they are technically NOT twins.

Odalis, who is a counselor by profession, said: “I got pregnant while I was already pregnant. I just say that they’re twins but after reading a lot of articles I know that they’re technically not twins but it’s just confusing for people so I just tell them like, ‘Yeah, they’re twins.’ Sometimes me and my husband, well more my husband, will get them mixed up with each other.”

Months before, Odalis became pregnant, though during the 12 weeks of pregnancy in July 2020, she discovered that she had a miscarriage during her check-up. The couple tried again after a few months and fell pregnant again in the same year.

Odalis said: “I was extremely happy that the pregnancy test was positive, and we were on our pregnancy journey again. I felt really lucky. I know a lot of people that have been trying to conceive and just haven’t been able to so that was also a fear of mine, but thankfully that wasn’t our case and I fell pregnant really quickly.”

Odalis admitted that she is overjoyed but worried at the same time. “I felt really, really happy and also scared because of the miscarriage. It was pretty terrifying throughout my whole pregnancy, not knowing if that was going to be the outcome again. Hoping for the best but knowing there’s always a possibility that things might not go as planned.”

The couple did not expect to be pregnant so soon. “The month that we conceived – and before we even knew that I was pregnant with two babies – Antonio and I had gone to the park to work out. He was shooting basketballs and said, ‘OK, if I shoot this basket and I make it, you have twins. Just kidding!’ And he made it, and I was like, ‘Haha, very funny’.”

Due to COVID regulations, 31-year-old Antonino had to wait outside the room during the ultrasound scan.

Odalis said: “I was just so scared that they were going to tell me, ‘Oh, there’s no heartbeat’, so I was so anxious the whole time I was texting Antonio: “I’m so scared”. The doctor comes in, and I’m trying to mentally prepare myself for anything and when she found the first baby and the heartbeat I was crying with so much happiness.”

“And then she started going back and forth, and I was wondering why,” Odalis added. “My mind just went to the worst-case scenario because of the traumatic experience that we had. That’s when she told me that she had found another baby that also had a heartbeat.”

The mother of two reveals that her due date was set in between: 2 days before and after one baby turns 40 weeks.

Odalis said: “I feel like it’s some sort of miracle that I experienced this double pregnancy. Because of our first experience, it made everything during this pregnancy feel so much more special and magical. It was a really beautiful moment to finally be able to hold them in my arms. When I held them and knew that they were ok, I can’t even explain the feeling. I love my family and my husband, but I had just never experienced love and happiness like that.”

Congratulations to Odalis and Antonio Martinez!