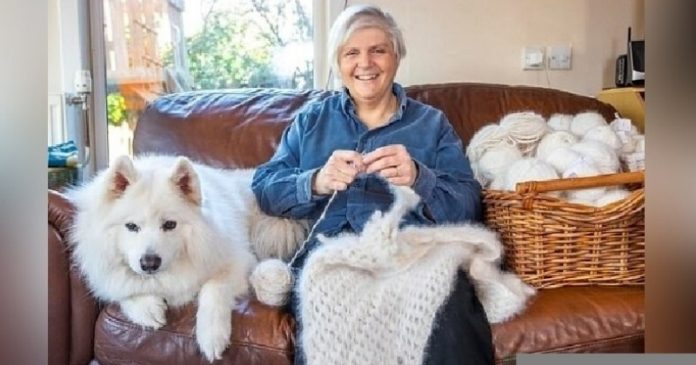 Raising 2 Samoyed dogs can be fun, although most of the time, they shed a lot of their hair and can make such a mess. An “aunty” simply just picks them up and spins them into yarn, but also with the help of other dog owners whose furbabies also shed so much hair. She simply started a DIY craft made of dog fur at home.

The main function of fur on dogs is simply to keep them warm, especially on a cold day or during the winter. There are different types of fur depending on the breed of the dog. 57-year-old Jane Crewe from Edinburgh, UK, raised 2 Samoyed dogs. Naturally, their fur is long, fluffy, and very soft. The disadvantage of raising Samoyed dogs at home is that they lose massive amounts of fur and they leave a mess on the floor. One day, Jane discovered that Samoyed fur can be spun into yarn, and this started her adventure into crafts and made hats and scarves that will keep you warm!

Aunt Jane admitted that when she was 16-years-old, she saw Samoyed dogs and was determined to raise them in the future. When she finally came of age, she fulfilled her wish and raised Samoyed dogs. She loves this breed of dog so much that she started reading books about them, determined to know more about them and how they are raised properly. Samoyeds are related to Huskies, who are from frigid areas of the world. These breeds have naturally soft fur that often shed a massive amount. Jane then had an idea to spin Samoyed fur into yarn!

Although she had a spinning wheel at home, Jane had no experience in spinning fur into yarn. She spent a lot of time studying them online and reading books. Gathering all the fur that has shed from her 2 dogs, she dried them under the sun for 2 to 3 days, then began to work on the spinning wheel. In the beginning, it was a struggle to spin dog fur into yarn.

Not much success spinning fur into yarn, she then started watching videos to learn further about this craft. She practiced daily but then discovered that to spin more fur into yarn she needed more fur from her dogs. At the time, her dogs could not shed more than enough for spinning. Aunt Jane then resorted to Facebook, asking her friends who were also raising Samoyed dogs for their fur. Many of them were more than willing to help Jane and replied that they will be providing more fur for her to spin into yarn. Much to her surprise, she received more than a hundred replies in a day, and they have sent her more than enough Samoyed fur.

Once Jane had become proficient in spinning dog fur into yarn, she began enjoying it and started knitting the yarn into hats, scarves, and teddy bears, and gave some of them to her friends who have provided dog fur. Once she discovered that it was a success, she planned to make duvets and blankets, too.

Aunt Jane said: “The fabric that can be made from dog hair is just the same as wool. It can be used to crochet, make insulation, and even make duvets! But, not all types of dog hair can be used for spinning, like Labrador and Spaniel are not suitable.”

Aunt Jane has discovered that raising Samoyed dogs can be like raising sheep. Their fur can be useful to keep us warm during the cold season.

These portraits may look aesthetically appealing but there is a surprising...