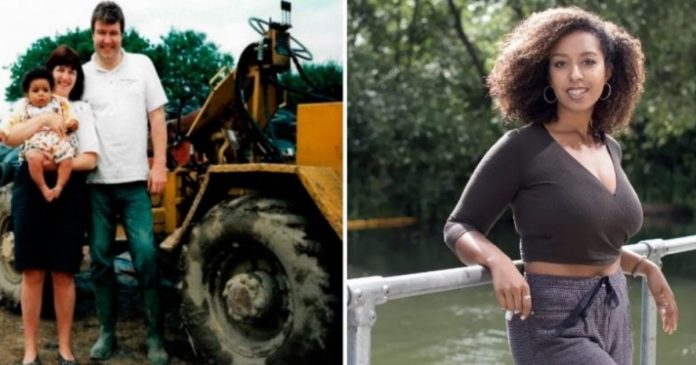 It is genetically possible for a white couple to have children of different skin colors, providing that there are ancestors from both parties who belong to a different race. In this new era, it has been very common for partners to be of various cultural backgrounds.

28-years ago, a white couple from England has welcomed their first child, a daughter. Georgina was born to Jim and Colette Lawton. She is in good health, though her skin color was different from her parents. The husband was surprised at first that the baby’s skin color was dark. Assuming that the wife had ancestors of various races, he never questioned her about this and thought that this may be a DNA inherited from a higher generation. When his daughter became an adult, and after some persistence, she finally found out the truth from her mother.

While his daughter was growing up, Jim always believed that Georgina had only a slightly different skin color, and since both her parents were white, he believed her as such also. The couple had stable jobs, and finances were good. Georgina also had a very happy childhood. Once she started going to school, she had encountered so many embarrassments from everyone. Her class adviser openly asked her why she had a different skin color from her parents, but her school records have shown otherwise. She was recorded as “white”. The school administration started asking questions to her parents whether Georgina was adopted or they made a mistake in her files upon enrollment.

Additionally, schoolmates and other children who have seen her family would either ask her questions about this or make assumptions behind her back. The situation made Georgina feel embarrassed up to the extent that she had some psychological problems. Seeing her go through the difficult situation, Papa Jim guided Georgina, telling her that it may be of some genetic DNA passed down from ancestors.

Sadly, Papa Jim passed away from cancer days before she graduated from college. After graduation, she decided to have a DNA test and discovered that Jim was not her biological father.

Upon learning the truth, Georgina felt agitated and went home to ask her mother for the truth. At first, she was hesitant to answer any of her questions, insisting that Jim was her father and he raised her properly. After repeatedly asking her mom and bragging her about the truth, she finally admitted that she has cheated on Jim with a strange black man she met at the bar.

Although Jim was surprised to see a dark skin-toned baby born to his wife, he completely accepted her and never questioned his wife about cheating. The most important matter for Jim was, Georgina was in good health, and the family is very happy. Jim treated Georgina as his own until the day he had passed.