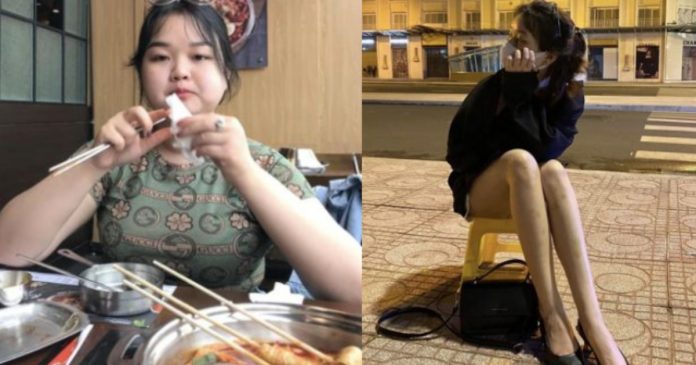 Being betrayed by both people you trusted and loved the most is the worst pain a person could undergo. A chubby woman and her boyfriend of 3 years have broken up in one of the most painful ways… discovering that he was cheating on her with her best friend! Although she had a breakdown for some time, she soon stood her ground and transformed herself into a more beautiful woman than her cheating best friend.

A 21-year-old female student in Vietnam, Nguyễn Thị Thảo Nhi, transformed herself into a beautiful woman by losing 30 kilograms in just 4 months. She has achieved the perfect body fit for a model, and she has become one of the most popular women in Vietnam. She calls this the “most beautiful revenge”.

According to Vietnamese media reports, Nguyễn Thị Thảo Nhi from Ho Chi Minh City has been in a relationship for three years. In the end, she discovered that he cheated on her with her best friend. The double betrayal hit her very hard, and it led her to a breakdown. To relieve herself of the negative emotions, she started exercising as a form of anger release output. Unexpectedly, she lost nearly 30 kilograms, and the beautiful result pulled her out of her misery!

Was he for real, or a liar? Her ex-boyfriend kept assuring her, “I like fat girls”, but in the end still cheated on her for her “more beautiful” best friend. Nguyễn Thị Thảo Nhi used to have a plump figure since she was a child and this resulted in her losing confidence.

However, when she met her ex-boyfriend when she got to high school, he kept praising her plump figure and saying that she was charming which helped her gain her confidence. They dated until her sophomore year. She was happy and content though all of that shattered when he cheated on her with her “more beautiful” best friend. She admits that when she learned the truth, she had a breakdown for quite some time. In the future, she may never trust all the sweet words men tell her.

Nguyễn Thị Thảo Nhi was 80kgs. when she was still in a relationship and trimmed down to 50kgs. after the breakup! Twice betrayed and ended up brokenhearted, she made up her mind to avoid high-calorie sweets, shake cups, abstain from her favorite snacks and beverages for more than 20 years, and welcome strict diet control such as low sugar and low salt, occasional fasting, and high-intensity exercise. She lost 30kgs. of fat in just 4 months.

During the grueling 4 months after the break-up, Nguyễn Thị Thảo Nhi revealed that she dropped her weight from 80kgs. to 50 kgs. Her friends cheered and praised her for achieving “the most beautiful revenge”! She laughed and mentioned that she thanks her best friend and ex-boyfriend, who provided the “disguised” motivation to transform herself into the best version of herself and become a more confident woman than ever before!