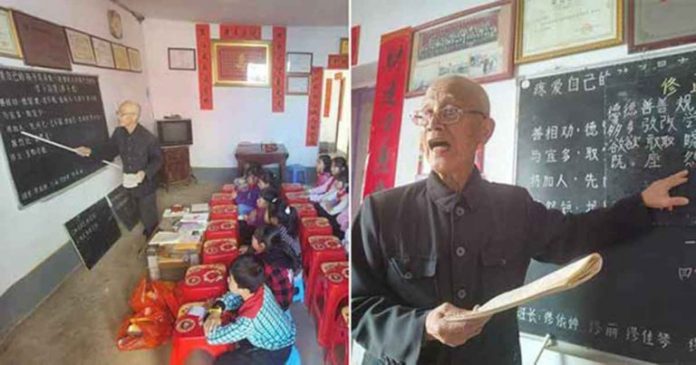 To everyone, time is precious. It may be abundant and free, but it is the one thing that you should not waste. For elderly people, life may no longer be difficult, and they can enjoy life with ease and relaxation. Though there are senior citizens who spend time enjoying what they love.

This is a story of a grandpa in Jiangxi Province, China, who wanted to spend his final years teaching kids in his village.

He is 91-year-old Miao Yanxiang. He uses his own house to hold classes and gives free lessons to kids in the village, all at his own expense. For more than ten years, this was how he spent his time. He provided ample lessons to the children at no expense. He even buys gifts for the children. The kids, in return, come to class diligently and do well in their schoolwork. Grandpa is grateful.

Miao Yanxiang said that, initially, his house was for his retirement. But he noticed that kids were being unsupervised by their parents and could not afford to go to school. Some other kids are left at home when their parents are at work. No other adults are supervising them, and most of the kids go to internet cafes or play with other children on the streets. Grandpa thought this was just a waste of time and also very dangerous.

He then decided to transform his house into a classroom where the kids can take classes and learn. He provided everything, from tables and chairs to a blackboard on the wall.

Miao Yanxiang decided to hold classes for the children to keep them out of the streets since they do not have a suitable playground. Most of the parents and grandparents of the kids were not highly educated, and they could not teach the kids the proper knowledge, and also help them do homework.

Therefore, Miao Yanxiang decided to build a classroom in his own home and teach the village kids.

Grandpa Miao Yanxiang also had a library built for the children’s schoolwork needs. He said that the bookshelf alone cost more than US $317.00 (2,000 yuan). He revealed that some of the books he bought using his own money, the others were donated by kind-hearted people.

The children can not just get and return the books on their own volition, though. Every book borrowed was recorded and given a due date for returns.

Miao Yanxiang’s lived a very simple life. His son revealed that he was a vegan, refusing to eat meat and fish.

He had saved all the money some of the children have given him and used them to buy school supplies such as notebooks and pens to be used for their classes. For every class he teaches, he would give a small token to the kids who did well in their homework, and to kids who made progress in their schoolwork.

A simple blackboard was installed on the wall. A TV was used for music classes. The supplementary classes that Grandpa Miao Yanxiang has set up have been ongoing for ten years. Within this period, more than 3,000 children have already attended his classes, most of whom believe that they have been greatly helped by him.