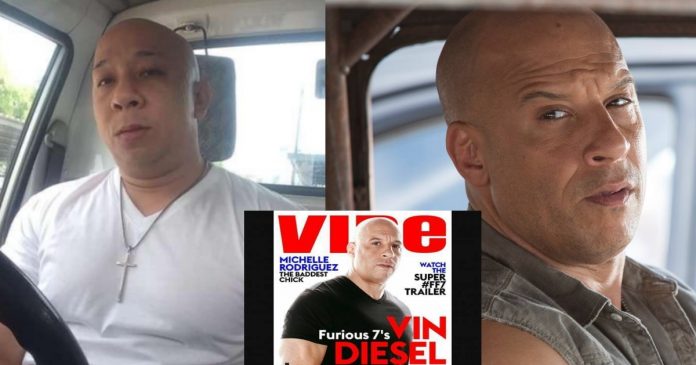 In 2019, a man in Thailand uploaded a photo of himself on his social media page and immediately went viral due to his close resemblance to Hollywood celebrity, Vin Diesel. His built, his facial features, and his imitation of Vin’s characters in his movies make this man an ideal candidate for a body double.

The photo that garnered hundreds of views and discussions from various netizens shows a bald man driving a car, wearing a plain white t-shirt and a necklace with a cross. The first thing that came into the minds of people who have seen the photos is Vin Diesel’s character, Dominic Toretto, from the Fast and Furious movies.

This is the photo.

The uploaded photo did not come with any captions or photo descriptions, though it immediately went viral, garnering over 75,000 shares as of late.

The man from Chiang Rai may have observed that he is the Hollywood celebrity’s lookalike before he was noticed by other people and made him rise to fame.

The man is assumed that he may be a fan of the actor since most of the photos he uploaded pay tribute to Diesel. He has also uploaded more photos and videos of himself building his body, similar to the Fast and Furious star. In 2016, he featured Vin Diesel in his Facebook cover.

In his profile photos from 2017 and 2018, he also wore the same signature white T-shirt that Toretto wore and captured photos of himself in the same poses that the character did in the movies.

Early last year, the man uploaded a photo of a younger and slimmer version of himself, depicting one of Diesel’s characters in a movie. It was his version of Richard B. Riddick, from Diesel’s movie in 2004, The Chronicles of Riddick.

The lookalike also uploaded a video of himself using a FaceApp that changed his facial features into that of Vin Diesel’s. There was not much change, though.

He appreciated his fans and thanked them all

His fame and the attention he gets from people from around the world did not go unappreciated. He thanked all his “fans” and acknowledged the attention he has been getting, so far. He shared a hilarious image of himself that a netizen posted earlier, with a face of Vin Diesel photoshopped onto his own.

His Facebook page is filled with more photos of his Dominic Toretto cosplay (and various Vin Diesel jokes that will surely make you LOL). Check them out here.