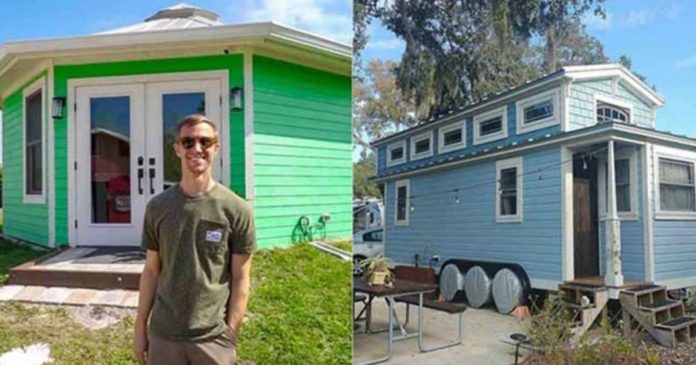 “I’m happy to live in a small house.” A blogger from the USA, 31-year-old Tim Davidson did not come from a wealthy family, though he owns an island as of late and is living the life envied by many people.

Tim was an employee in a company in Florida while he was still living in his parents’ house. Just when he was living a comfortable life, his parents decided to make him move out of their home.

“I’ll give you two months to move out of this house,” said his father.

By the age of 27, Tim’s parents expected him to have a place of his own and he was given a headstart. Having said this, Tim had no other choice but to go on his way.

Having worked for several years, he expected to have enough savings to buy himself a house but felt hopeless when he realized he did not have enough.

“I’m a single man, I don’t have much luggage, and I often think while working to buy an apartment… Is that necessary?” he said.

After giving it much consideration, Tim came across a 25m² “wheelhouse” due to the urgent need at that time. He assumed that he would be comfortable at the mini house since he neither had a wife nor a girlfriend.

The romantic blue exterior walls of the mini wheelhouse immediately caught his eye.

Inside, it has a kitchen, bedroom, and bathroom. Although the space is small, it is complete with internal decorations and furniture.

“It exceeded my expectations, I’m very satisfied!” he exclaimed.

Tim did not hesitate and immediately bought the mini house. Despite its small size, it had all the necessary rooms, and the living room was very cozy.

In one corner, there is a space where you can cook and prepare food. The house was also equipped with a small folding table where Tim can have his meals.

For a 25m² “wheelhouse”, this was complete. Good for Tim Davidson!