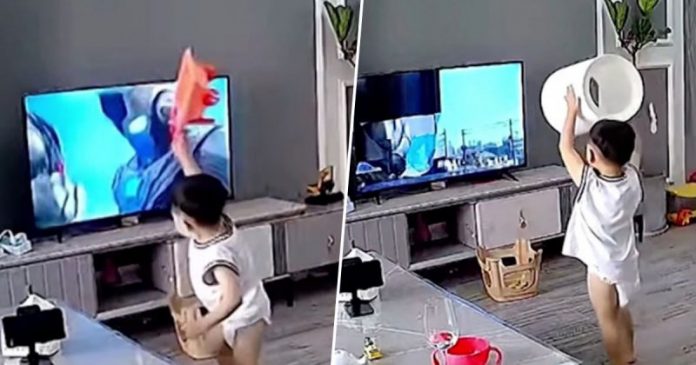 We have to admit, cartoons nowadays on TV have a lot of violence. A hero battling with an enemy using lasers, guns, and even fist fighting. Some of them chase each other and hit one another which the kids find hilarious. Kids, whose minds are still being molded at a young age, tend to imitate what they see.

There is a channel on TV that shows various cartoons 24/7, and this is usually the channel that parents allow their kids to watch when they are busy doing chores around the house and cannot tend to them for the moment. Cartoons are usually the hero/villain type of shows that the children get obsessed with. Sadly only 10%-15% of cartoon or animated shows on this channel are educational. Worse, only a few children watch them.

In a child’s mind, these heroes they see on screen are real and happening as they watch. As a result, some of the kids who assume they are real try to interact with them while they watch. A toddler was throwing some of his large toys on the TV screen while watching his favorite hero.

He was watching “Ultraman”, while the protagonist was battling with, what the child was assuming, an alien from another planet. He wanted to help Ultraman defeat the enemy, hence he threw some of his toys towards the enemy on the TV screen, destroying his mother’s LED TV.

Not only did he throw a toy he had, but some of the things he could grab that were large enough for him to think he could defeat Ultraman’s enemy. As a result, this damaged a part of the TV’s LCD.

Netizens who have watched the video of the child raised questions on where the parents, or even the guardians, were. Only a few thought the video was hilarious, but most parents were furious upon seeing the child watching TV alone and without guidance.

Be alert of the shows your children watch. There are ratings, G = General (for all ages), PG = Parental Guidance (should be watched with an adult), and R = Restricted (NOT for children below 18).

You may watch the video here. (Click on the link below the photo)

Parents, it is not wrong to let children watch their favorite cartoons on television, but let an adult watch with them for guidance and to remind them the difference between reality and make-believe.