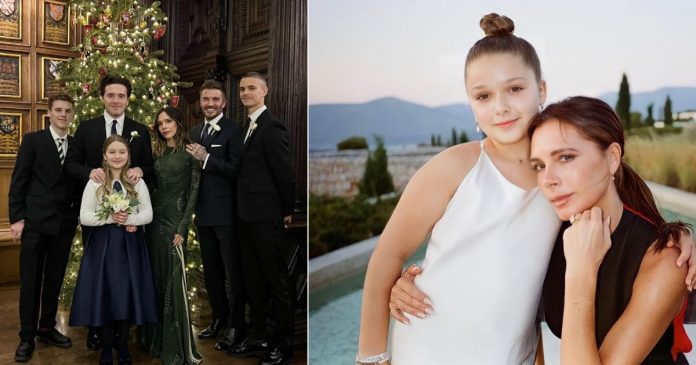 Recent photos of David Beckham’s daughter, Harper Seven, have been circulating on the internet. At 10-years-old, she has been living under the limelight due to her parents’ high-profile status. There is no doubt, the Beckham siblings are the next generation of superstars.

Discussions on the internet from netizens say that Harper Seven and her siblings come from a perfect family! Her father, David Beckham, is a handsome professional British football player, and her mother is the beautiful Victoria Beckham, a.k.a. Posh Spice of the Spice Girls. All the Beckham siblings have inherited their parents’ genes of beauty and brains, and the youngest sibling, Harper Seven, has been the favorite of the paparazzi. Harper is now 10-years-old and looks quite different from the baby her parents used to carry. Netizens have been calling her, “The mini Victoria Beckham.”

When she was younger, Harper Seven was a chubby and petite girl, which the media would capture in a photo wearing a quirky expression. Her innocent smile and fair skin make her irresistible to people who want to give her an embrace. She would often be captured on photos being carried by either her father or her eldest brother.

In December 2019, when Harper was 8-years-old, she was baptized together with her older brother, 14-year-old Cruz. Although she was already quite tall for her age, she was still the favored one among the siblings. A photo showed a tired David Beckham carrying Harper Seven after the ceremonies. The father-daughter duo is often captured in photos together by the media when they are in public.

This 2022, 10-year-old Harper Seven has grown up. The cute little chubby girl has grown into a beautiful young lady. Her choices in clothing have changed into more mature styles, wearing fashionable skirts and dresses, and wearing earrings, too. She looks more like a younger version of her beautiful and elegant mother.

The little girl that the public has seen since her childhood days has grown and everyone agrees that she has inherited her parents’ genes perfectly. The quirky child has transformed into a beautiful young woman. She is definitely going to be a media favorite in the years to come and maybe become a celebrity herself, just like her sporty father or her mother, who is a singer.