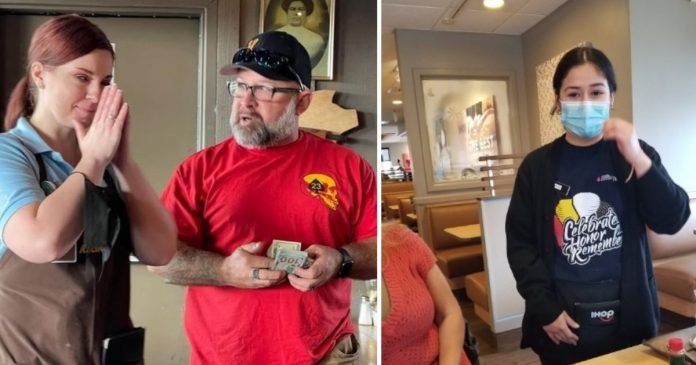 Many servers in restaurants have been lucky to receive huge tips from generous customers during the holidays. This is a story of 4 different servers from various states in the U.S. and how they were gifted with a large amount of tips by kind-hearted customers they have served.

Waitresses Rachel, Rosa, Roxana, and Ashley had the best of the holiday season when they were given unexpected surprises.

Celebrating the annual tradition called “Christmas Tip the Waitress,” Kevin Nies and his wife planned the occasion with their group of friends to “change someone’s life for a day.”

“Waitress Rachel is a single mother of 2 teenagers with no family in Texas,” Kevin shared.

At the celebration, more than 20 people attended the occasion and contributed a total of $1,300 on a $270 bill. Kevin shared a video of the event on his social media page, hoping that other kind-hearted individuals would do the same.

A $1,900 tip for their server Rosa, was given by a group of 19 friends who enjoyed their breakfast at iHop.

Ashley paid it forward and shared the money with her co-employees. $920 was left with her, and she planned to spend it on her children.

These 4 servers from different states had the best of the holidays. Thanks to the generosity of kind-hearted people who spread the holiday cheers!