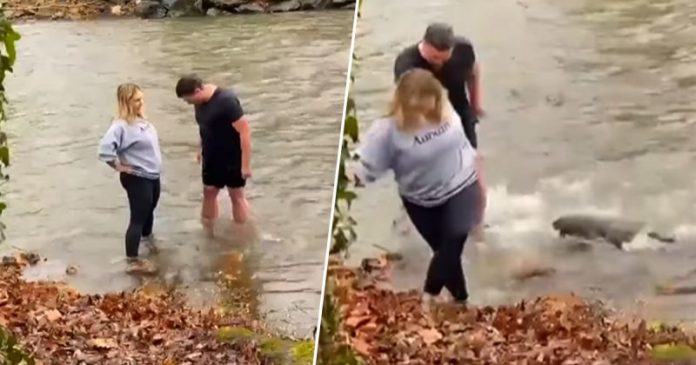 A couple was surprised to encounter an angry beaver swimming fast towards them while they were enjoying the cool water of a creek. People who are familiar with beavers know that they are animals in the wild and they belong to the rodent family.

Beavers are one of the largest animals belonging to the rodent species. They are herbivores, feasting only on leaves, tree barks, twigs, roots, and water plants. These rodents are classified in the family of Castoridae, in the order of Rodentia.

Their species are known to be very good swimmers with a speed of up to 5 miles per hour. They can remain underwater for up to 15 minutes without surfacing for air.

The beaver’s large, webbed hind feet are used for driving power when it is swimming and the broad, flat, and scaly tail serves as a rudder.

Beavers are known not to be too aggressive, and they usually do not attack humans. Though when they feel threatened or disturbed, they tend to attack despite how good-natured they are, and their bite can be extremely painful.

The beaver seems to be in an aggressive mood on the day it has tried to scare the couple who were relaxing in the cool waters of the creek. Perhaps, it did not like people hovering in their territory. The incident was captured on video and has gone viral. When it was posted on social media, various reactions from netizens were placed in the comments section.

At the beginning of the video, the couple was calm and relaxed in the creek, enjoying the refreshingly cool river water and the beautiful weather.

However, while the couple was having fun in the cool river water, an angry beaver suddenly appeared in the water and swam straight towards them. It appeared to be driving them away from the water, warning them that the river was its territory. Terrified, the couple ran to the shore, but the beaver seemed to follow them on land away from the water.

The couple assumed that the beaver did not live far from where they lived. Usually, their houses are built with logs and mud. The floor is just above the surface of the water, with a comfortable bed made of soft shredded bark. In the roof, there is a small hole for fresh air. The entrance is below the surface of the water. During winter, beaver houses maybe frozen, but the underwater entrance is always open.

The video clip gained various reactions from netizens. Some of them found it funny while others say that it was quite dangerous. According to some comments, the couple was lucky to get away from the beaver as its bite may have been toxic since they are animals in the wild.

Beavers are a national wildlife symbol for Canada, while in some states in the U.S, such as Oregon and New York, these rodents from the wild are the official mammals of their cities.

Puppy couldn’t get his mouth closed so his owner brought him...