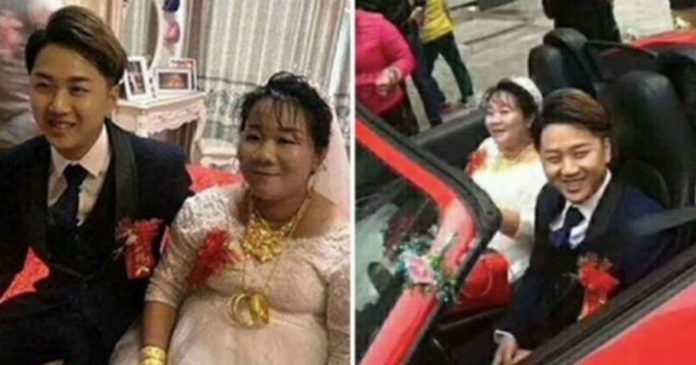 Many people believe that age is just a number, that the state of one’s mind is more important. So they say. When a man or a woman desires to marry a much older person, more often than not, the parents interfere, especially when their age gap is more than a decade!

This is a story of a much older woman who married a man in his early 20’s. Naturally, the parents of the groom disapproved. However, the bride came up with the best solution that she knew her future in-laws would not disapprove of.

Citizens who watched the video were shocked by the huge age difference between the bride and the groom. The woman is reportedly 15-years older than the man, and only a year younger than his mother.

According to reports, the woman has a 14-year-old son from her previous marriage, and she only married her former husband when she got pregnant.

Initially, the groom’s parents did not approve of their son marrying a much-older woman, though they finally gave their blessings when the bride gave them a dowry of US $103,758.00 (660,000 yuan) in cash, a Ferrari, and some real-estate assets, which totaled to approximately US $150,926,639.30. An extremely expensive dowry!

China Press reports that the wedding took place in China’s Hainan Province, and the grand event was a posh celebration with the bride and groom’s family and friends.

During the event, the bride wore a traditional wedding dress adorned with large gold jewelry while the groom chose to wear a tuxedo. The happy couple was sitting in a red sports car, and the groom had a wide smile on his face as the bride says her goodbyes to the guests.

Judging by the happiness everyone could see on the couple’s faces, everyone would assume that they are mutually in love, though a close friend of the groom claimed that the bride was formerly the groom’s “sugar mama.” The couple decided to get married when they found out that the bride became pregnant.

The couple was in a casual relationship when they found out about the unplanned pregnancy. The groom’s parents only agreed to the marriage when they were gifted housing and cash as dowry from the bride.

Despite bashes and comments of disapproval from many netizens, many people still congratulated the newlyweds. Their family and friends wished them the best, and may they stay in love forever with each other and have a fruitful marriage.

Congratulations to the bride and groom!

Young Girl Almost Died of Peanut Allergy when a Passenger on...