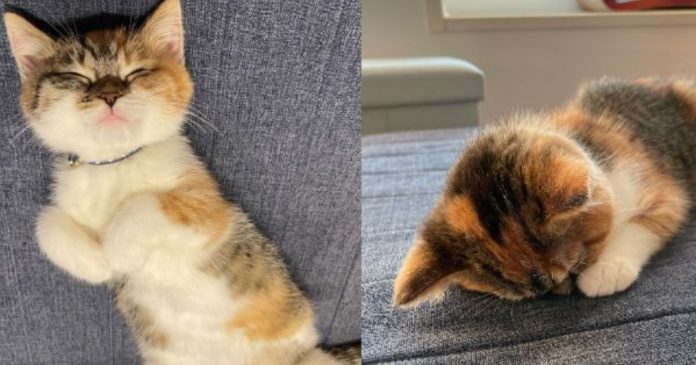 The owner has captured the moment when Mugime was about to do doze off to sleep but kept fighting to stay awake. His eyes narrowed into slits with an adorable expression on his face that says, “I feel very sleepy, but I still want to play.” Netizens exclaimed, “He’s so cute!”

Mugime’s owner often shares his life story on Twitter with an account name, @mugimedayoo. One day, when he saw Mugime trying to fight his sleepiness, he could not help but laugh at his hilarious expression. He immediately captured the kitten’s funny facial expression on his mobile phone. Although Mugime was resisting the urge to fall asleep, he still sat upright to fight the drowsiness. His owner shared photos and videos of Mugime but seeing the photos alone will surely entertain his followers who will not resist giggling at the hilarious sight.

The playful kitten recently just arrived at his new home. At a young age, the kitten has displayed quite an amount of curiosity, climbing up and down the stairs, going in and out of the house, exploring his new world. On his crib, you will notice stuffed toys like an alpaca and a giraffe. Mugime is having the happiest of days and living the best cat life.

Here are some of the comments on Mugime’s photo on Twitter:

“I really want to hug him!”

“It wants to sleep and play.”

“The cat must be struggling to keep awake.”