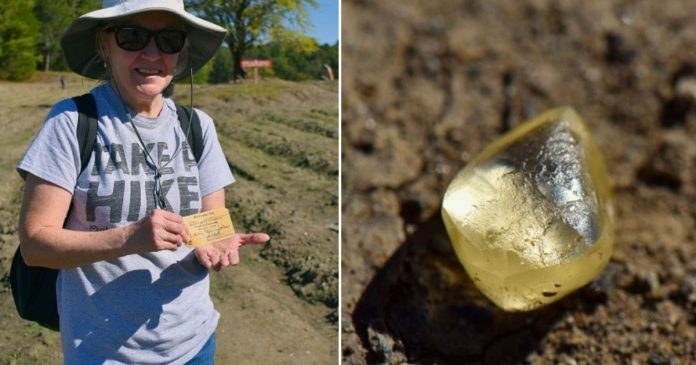 A lucky woman has picked up a “4.38-carat yellow diamond” on the soil, unknowing what it was at first. She was visiting the park on vacation with her husband and did not expect to be richer after that fateful day.

A female tourist was visiting Crater of Diamonds State Park in Arkansas with her husband just a few months ago. The park is famous worldwide for its diamond-containing area, which is open to the public. The tourist randomly picked up a shiny stone on the soil unknowing that it was a 4.38-carat diamond!

On September 23, Noreen Wredberg and her husband Michael visited the park for leisure purposes, and not expecting to find any diamonds in the area. According to reports by CNN, Noreen picked up a shiny yellow stone on the soil, unknowing what it was. When she sent it to the park appraisal center, she then realized that it was a diamond weighing 4.38 carats.

“I didn’t know it was a diamond then, but it was clean and shiny, so I picked it up,” Noreen said.

According to Park Interpreter Waymon Cox, it was raining for days before the couple, who are from Granite Bay, California, visited the park. The weather conditions were perfect when they decided to do the treasure hunt on September 23, the sun was up.

“When rain uncovers a larger diamond, and the sun comes out, its reflective surface is often easy to see,” Cox said. “Noreen took less than an hour to find a diamond.”

“The diamond is about the size of a jellybean, with a pear shape and a lemonade color,” said Park Superintendent Caleb Howell. “When I first saw this diamond under the microscope, I thought, ‘Wow, what a beautiful shape and color!'”

In 1972, Crater of Diamonds State Park was established by the Arkansas Department of Parks Heritage and Tourism. The park measures 37.5 acres (15.2 hectares) of fruitful land and is the only diamond-bearing site in the world open to the public.

On Labor Day in 2020, a holiday in the United States, an unnamed man from Arkansas has discovered the second-largest diamond ever found in the park since it has been established, weighing 9.07-carats. Noreen Wredberg found the third-largest by weight.

10-yo girl rides electric scooter at night, takes 3-yo sister along...