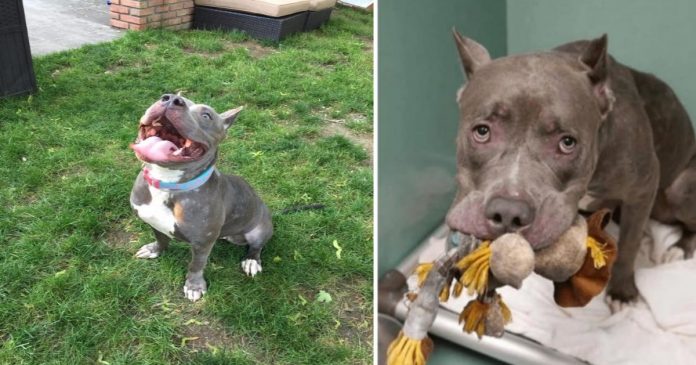 Animals are left in shelters for various reasons. Like humans, they too grow old and useless, or because they can no longer be controlled by their owners, or they have behavior issues, or even when the families have to move away.

In the case of a young pitbull named Layla, she was left in a shelter because her family thought they had more than enough pets at home, says Jackie O’Sullivan, a confounder of Rescue Dogs Rock NYC, a shelter that rescues stray, abandoned and abused animals.

“We read the notes left by its owner, which recounted that he had 5 children and two other dogs, and that he could not take care of everyone because he had too many pets. It was very sad.”

Layla was very close to the 2-year-old and 7-year-old children in the family, according to the Facebook post about her. So when Layla was abandoned in a shelter, she did not know what to do.

“The only thing that seemed to give her peace of mind was her stuffed toy. She was self-soothing with her little stuffed animal.” O’Sullivan said.

“She carried her stuffed animal down the street or in the garden, she never left it,” says one of the rescuers, Julie Carner. “That stuffed animal is all she’s got.”

But the stuffed animal toy couldn’t help Layla much more, who was in a high kill dog shelter, and if they didn’t adopt her soon, she was going to get euthanized.

“She was on the list several times, so the shelter wasn’t going to give her any more time,” Jackie says.

Luckily, Rescue Dogs Rock NYC volunteers took her out of that shelter and she’s now staying in a foster home.

“She adapted quickly. We spent hours playing in the garden. She played and felt safe again. She was doing very well, and she’s certainly a great little dog, we hope she’ll be adopted in no time,” Jackie says.

“There are so many wonderful dogs that are abandoned in shelters every day.” O’Sullivan added. “It’s so heart-breaking. But we’re happy she’ll get her chance, because from everything we’ve seen, she’s a great little dog.“

Layla is waiting for a family who will adopt her, love her, with children she can play with and will care for her, and would love to play with more dogs. Layla is now very happy she has the chance to show her affection!

If you’re interested in giving Layla a forever home, contact Rescue Dogs Rock NYC. Spread the word so we can help more dogs like Layla have the opportunity to live with a family that will love her.