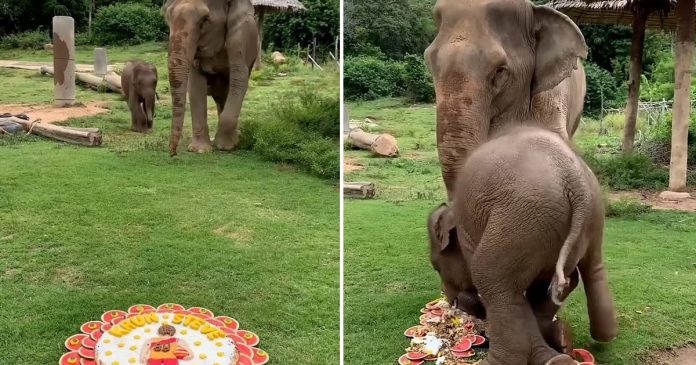 Footage went viral of a cheeky baby elephant who lives in a sanctuary in Thailand and had the viewers rolling with laughter when the video showed the baby elephant destroying the perfectly-made cake especially for his grandmother, crafted by the sanctuary staff.

On October 13, upon seeing that there was a cake laid out on the ground, Haven, 2, and his 70-year-old grandmother, Sri Nin, quickly walked towards the treat. However, the playful toddler ran ahead and stepped on the cake. While his grandma casually eats some of the pieces of cake left, Haven takes a chunk of the watermelon, chews it, then spits it out.

The naughty baby elephant then slides his trunk across the cake, damaging the layout some more, and finally slides across the treat and sat on it, not satisfied with the damages he made the first time. His grandma, though, continued to eat some of the remaining food that was left in front of her, not minding the mess Haven made.

Samui Elephant Haven, the sanctuary where the two elephants live, shared the hilarious video on Instagram with the caption: “Grandma! Please stop him!” The footage instantly went viral and garnered more than 38,000 views.

“Our oldest elephant, Sri Nin, was rescued from a riding camp,” A representative from the sanctuary, based in Thailand’s Ko Samui island, told The Epoch Times. “Before that, she had spent two decades hauling heavy teak wood trunks and logs for the logging industry, a practice that was later banned in 1989 by the Thai government. She is blind in one eye and had her tail bitten off by another elephant as an infant.”

Haven, however, was born at the sanctuary. He was the first-ever baby elephant born on the premises.

The sanctuary staff did not expect Haven to make a mess out of the cake that was laid out perfectly on the ground, a treat made for his grandmother. They expected that Haven would consume some of the rice, pumpkin, and fruit-based cake, but not destroy it before he did. The hilarious video clip lasted only a minute but it has captured the funny antics Haven did, and it has made its rounds on the internet.

“It’s okay because baby elephants are naughty and we can’t control them,” they reasoned. “Finally, we knew that grandma would eat all of the cake!”

Haven is “polite and friendly,” but “sometimes naughty,” like a typical human child. He loves watermelons. Sri Nin is quite the opposite, according to the staffers, she is more “quiet” and “moves very slowly”. Due to her old age, she no longer can eat hard food. Although, she enjoys cooked rice and boiled pumpkin.

The sanctuary has a service wherein visitors and supporters can donate a cake, and in return, they will provide video footage of the resident elephants of your choice to be given the gift. The cake of Sri Nin was a personalized treat decorated with two names and a boy carrying a soccer ball, a gift from two of her supporters.

The Samui Elephant Haven was founded in 2018 by Maew Suriya. To date, the sanctuary has rescued 14 elephants, all of who were from various parts of Thailand and the tourist-trekking industry.

The staff is happy that the hilarious video footage of Haven and Sri Nin went viral, and this has helped raise their visibility across Thailand and other neighboring countries.

“I think many people love that,” the sanctuary told The Epoch Times. “Many people ask us for the video.”

Sri Nin and Haven live their lives in peace, safety, and hilarity. Thanks to Samui Elephant Haven sanctuary and its serene environment.

Watch the hilarious video footage: (Click on the link below the photo)

“Don’t ride or abuse any animal, and don’t endorse any company that does so.” These are the pieces of advice of the sanctuary to people from all over the world.