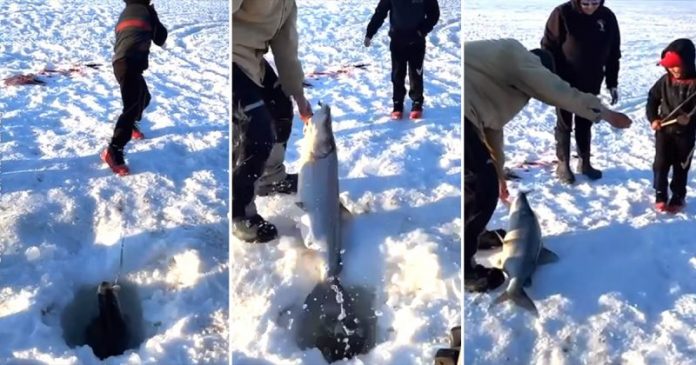 Fishing is a great hobby, though it requires skill, knowledge, and patience. At times you may be lucky, others, not. One day you may go home with your hands full, and sometimes nothing at all.

A little boy fishing on the ice while on holiday with his parents was lucky to catch a big fish with his toy fishing rod. The look on his face was clearly surprised that he even got a bite on the hook that day.

Six-year-old Drayden Nelson was surprised to catch a big fish from a frozen lake in Kotzebue, Alaska.

Using a simple toy fishing rod with a hook and bait, he waited and was suddenly surprised when he felt that a fish had eaten his bait at the end of the hook.

“Pull it up, son, pull it up!” Drayden’s father said, while encouraging his son to catch the fish by himself.

Drayden pulled the fishing string with all his might, and it was quite heavy for a young boy his size. The young boy did not expect his catch to be a big fish when it finally raised its head from the icy water.

His father then helped pull the big catch, which turned out to be as tall as the boy. The video clip showed how proud Drayden’s parents were when they saw how big the fish was when they pulled it out of the water and onto the ice.

Drayden was happy and proud that he was able to catch a “sheefish” (a species of freshwater whitefish) that was almost as tall as him, measuring 46 inches (117 centimeters) long. The family was amazed!

Although catch and release is a protocol for fishing, the video did not show if the family did release the big sheefish after the amazing catch. Drayden is lucky to catch his first fish that he could forever call a “pride and joy” in his chosen sport.

Without a place to sit, woman has to squat in crowded...