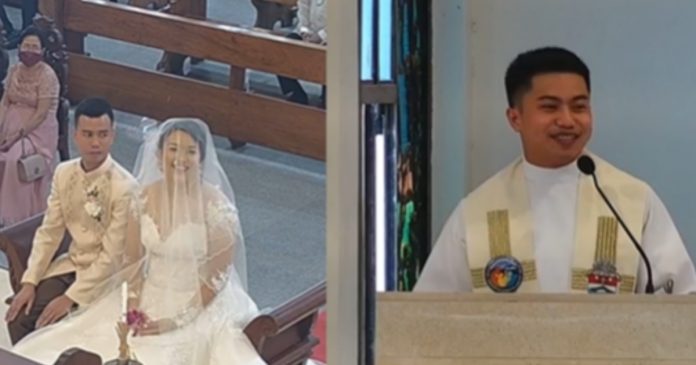 A Filipino priest officiated a wedding and admitted on a live webcast that the bride was his ex-girlfriend. This caused a stir to everyone present and a feeling of awkwardness between the couple and the priest. When the hilarious video was shared on social media, it garnered more than 10,000 views and instantly went viral.

According to ABS-CBN News, the video showed how nervous Fr. Roniel Sulit was as he was preparing to officiate the wedding, breaking out into a sweat, and frequently wiping them as soon as he got on the platform.

“You should see that I am sweating nervously.” Fr. Sulit said. “I have hosted weddings for many couples, but today is not the same because the bride, Korina, is my ex-girlfriend.”

Loud applause and laughter filled the air, and he jokingly asked Korina before the wedding ceremony if she was nervous about what will eventually be happening and what he would be saying at the wedding proper.

“This is embarrassing, we’re live on social media. But I won’t stop the wedding, that only happens in movies.”

When Korina decided to marry her current boyfriend, Manuel, she went to the parish where Fr. Sulit stays and requested him to officiate her wedding. He agreed with no hesitation.

Fr. Sulit said in the video, “Korina has been serving in the church for a very long time now, in fact, this is where we met. But that was long ago because now she is marrying Manuel. The past is past, right, Korina? We have our own lives now, I am a priest, and you are getting married. I asked her if she is happy, and she said she is, very much so. She said God brought Manuel into her life.”

Before Fr. Sulit handed over the wedding ceremony to the main officiating priest, he extended his heartfelt wishes to the newlyweds, and left with another joke, “I hope you have a happy and wonderful life together. They say that marriage is not between two people, but between three, the third one is not me, but God. God will be with you in your marriage.”

Father Sulit has 124,000 subscribers on YouTube. He is famous for sharing his day-to-day life as a parish priest. He also released a vlog about his chance encounter with his ex-girlfriend, Korina.

Best wishes to Korina and Manuel.