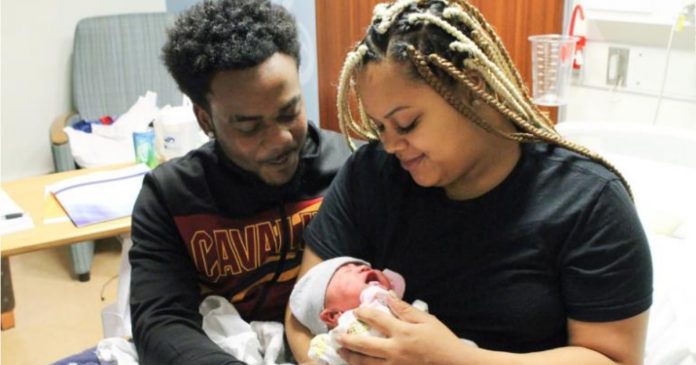 When Rachel Langford was pregnant, she would often come across the numbers 7 and 11. Of course, she didn’t know what it meant until her daughter, J’Aime Brown was born.

The baby was born on July 11, at 7:11 pm and weighed 7 pounds 11 ounces! It was also 7 Eleven Day, a day free Slurpees are given out. by the namesake company. That’s coincidence on a whole another level.

“I thought it was weird at first, and I didn’t know that (the numbers) meant so much,” she said. “A lot of the times (during the pregnancy) I would look at the clock and it was 7:11,” she shared with CNN.

Since she posted about it, she has been receiving endless phone calls from all over. One particular call came from 7 Eleven. That’s right, it’s the world’s largest convenient store themselves.

They had heard about the baby and wanted to offer a gift basket with some babycare essentials and their merchandises. She was overjoyed and even shared pictures of her daughter in an adorable 7 Eleven onesie.

Few days later, she received another call from 7 Eleven and this time, she couldn’t believe what she heard. The representatives that contacted her pledged to fund her daughter’s college expenses for an amount of $7,111.

“I was completely shocked, I kind of just freaked out,” Rachel told of her excitement. She of course said yes.

The young parents from Missouri have another 6 year-old son. The family is struggling quite a bit trying to provide for their children and pay the bills with their monthly income.

They are beyond grateful for the fund put forth by 7 Eleven.

“It’s hard for anybody to even get a trust fund for their children. To get a blessing like that, it just helps a lot,” thanked Rachel.

She also told that since her daughter was born, they have been able to get more things done. They are much calmer and have been feeling good, according to her.

As for baby J’Aime, she doesn’t care much for the limelight. She enjoys being fed and sleeping, and does not whine. Looks like blessing came in the form of a little angel for Rachel and her husband.

A woman showed her childhood picture to her fiance. To his...