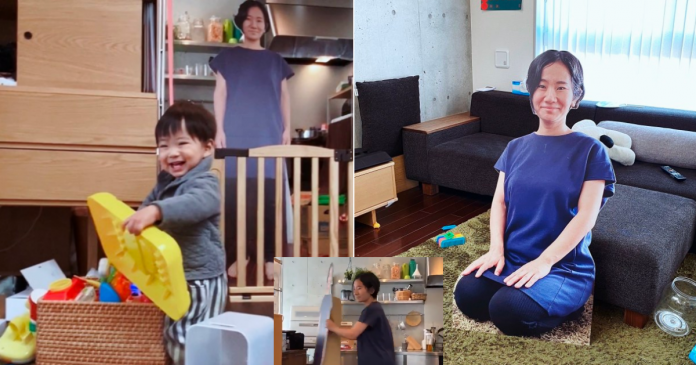 Many parents with young children know how tough it can be to get things done without having their young ones burst into tears the second they go out of their sight.

That is why these parents from Japan came up with a genius parenting hack to keep their son calm and it works!

In a Twitter post that has been making rounds on social media recently, Twitter user from Japan, @sato_nezi, shared a hilarious yet brilliant hack to trick their son to stay calm even when they are not in front of him.

According to the couple, they decided to print out life-size cut-outs of the mother, to trick their one-year-old son into thinking that his mother is always by his side.

There are two versions of the life-size cut-outs to use in any situation the parents seem fit.

There is the sitting version for when the toddler plays with his toys in the living room.

There is also a standing version of the cut-out complete with a maternal smile!

In the post, the parents also shared a video where the mother sneaks out of the kitchen after carefully positioning the standing version of the cut-out.

Despite the mother is not actually standing in the kitchen and looking down on the toddler, the boy seems to fall for the trick and keeps on playing without shedding a single tear!

According to the father, they decided to try the parenting hack as it was getting tough when the boy ended up crying the second he lost sight of them.

“It’s hard because my one-year-old, mum, cry as soon as she disappears from sight. As a countermeasure, I experimented with what would happen if I set up a ‘life-sized panel mother’,” he wrote in the caption.

The video has now garnered over 2 million views!

As the post now has gone viral, many parents who are struggling with similar situation shared their comments about the genius hack.

“My nephew is 1-year-old and he flips out every time his parents disappear, too….” one user commented, echoed by another user, “This! I would have loved this when I wanted to go to the toilet, or eat dinner, or wash my face! It looks funny, but I totally understand this reality!”

Meanwhile, another user commented that the life-size cut-outs should be made available for sale. “Someone make this available on the market!!” the user wrote.

So, to all parents who may not know what to do when the toddlers burst into tears the second they lose sight of you, this might be the ideal solution!