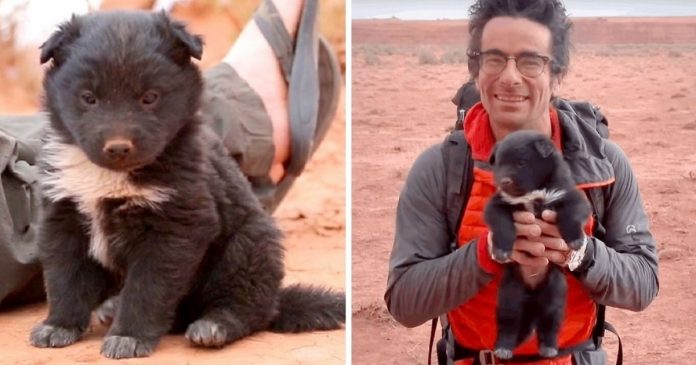 National Geographic grantee Cedar Wright and his expedition partner, Alex Honnold were on an adventurous 1,287-kilometre cycling journey in the American southwest when they heard a whimpering sound coming from the bush. The two definitely did not expect to discover their cutest member when they looked behind the bush.

The pair was on their mission to complete “Sufferfest 2”, an ambitious journey where they embarked on a challenging course of cycling and climbing some of California’s highest peaks.

Such expeditions required the two of them to forgo the comfort of relieving themselves at a proper bathroom.

“Sometimes you’re in the middle of nowhere and you gotta go, so you just pull off and pee behind a bush,” Wright said to National Geographic.

On one of their stops, Wright heard a whimpering sound coming from the bush but he never expected to find a cute puppy behind it.

“I have to pee so I just stop on my bike randomly in the desert,” Wright said as he later stopped near a bush to relieve himself. That was when he heard the sound.

“I look and there’s this little puppy curled up in an old tire hiding from the wind. I quickly realized that he had been abandoned,” he said.

Wright and Honnold then decided to bring the puppy along with them as there was no option of leaving the adorable canine alone in the middle of nowhere where water and food was hard to come by.

They later named the lucky puppy, Sufferpup, since they found him during their ambitious Sufferfest 2.

The adventure duo then turned trio thanks to their newest member!

“It’s really heartening at the end of the day to come down and have this adorable little puppy to cuddle with. Without Sufferpup I don’t know if we would have made it.”

Now, Sufferpup no longer had to survive on his own in the desert.

The adorable puppy has found a new home right after the expedition ended when Wright and Honnold’s friends adopted him.

“Some friends of ours adopted Sufferpup and now he’s eating organic dog food in Boulder, Colorado. So happy ending for Sufferpup,” Wright said.

Smart dog took the bus to meet up with owner on...