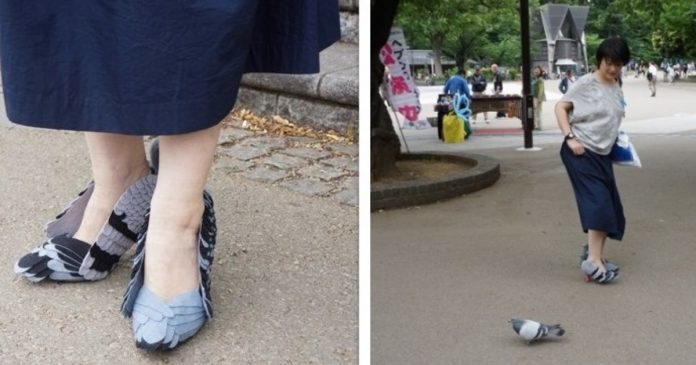 Pigeons are common in parks and squares, and sometimes they even circle people’s feet, asking for scraps of food. A Japanese citizen with a social media username @dailyportalz had an idea, and made a pair of “super-realistic pigeon” high heels and wore them to the park.

She wanted to see if it will attract the attention of the pigeons and group together into a flock. How, do you think, will the birds react to these “homemade” pigeon shoes? 😆

With a plan in mind, the woman first drew the design concept. Since the heel must be used to present the bird’s feet, the front of the finished pigeon design must be at the heel, and the toe is the tail of the pigeon.

So the woman first made a model of the pigeon’s head and combined it with a mix of wool felt close to the color of the pigeon feathers, showing a furry look~

She then glued the head to the brand new black stiletto shoes she bought. To show the pigeon’s slender feet, the woman also specially selected the heels’ height of 9cm. The pigeon head was glued on and it was perfectly fit.

She then made the shape of the bird’s foot with iron wire, wrap it with red silk thread, and painted some parts of it to make it looks like a pigeon’s foot~

After the feathers of the bird’s body and feet are glued together, the woman did not forget to add eyes to the “pigeon” figures. The careful maker even made the two pigeons exactly the same, and more realistic. 😆

In this way, after the pigeon high-heeled shoes are completed, the woman wore them to Ueno Park, Tokyo for “experiment!” (At that time, there was no pandemic yet, so there were a lot of people in the park, and everyone is not wearing a mask!)

The woman found a place where the pigeons appeared, and after putting on the shoes, she tried to find the pigeons and “made friends” by attracting them with her shoes.

After spotting some pigeons on the ground, the woman walked over.

“After walking around, I realized that these shoes should be moving backward so that it looks like the pigeons are walking forward, and it was very hard 😆. The pigeons went away… (Huh?)”

The woman found another group of pigeons, and then backed up towards them, but it seemed the pigeons didn’t want to meet the two “spy pigeons” connected to the feet of the woman.

As a result, the pigeons all flew away, but the pigeon shoes attracted a lot of people to come and watch, and take pictures. Everyone was very interested in the high heels of the woman, whose name turned out to be Vimy Wixiao, and her pigeon stiletto shoes. 🥰

The pigeons treated her as a “strange pigeon woman” wherever she goes, and they fly away one after another, and the birds scattered in different directions.

Later, a man came over to feed the pigeons some bread crumbs, which helped to attract them. Although the pigeons were temporarily attracted by the food, they had no intention of making friends with these two fake pigeons 😆. The woman herself laughed and said, “Thanks to the man’s blessing, I can finally rely on the crumb to get so close to the pigeons.” 😆

Although the idea of ​​pushing the fake pigeons to attract the real ones is a bit noisy, these two spy pigeons in the park really do not violate their harmonious visits. Finally, let’s take a look at the actual video of the woman in pigeon stilettos. ↓↓

▼With the “blessing” of the man, the woman can finally get close to the pigeons. 😆

Internet Celebrity from Indonesia Paid US $3,483.00 for Her Wedding Make-up...