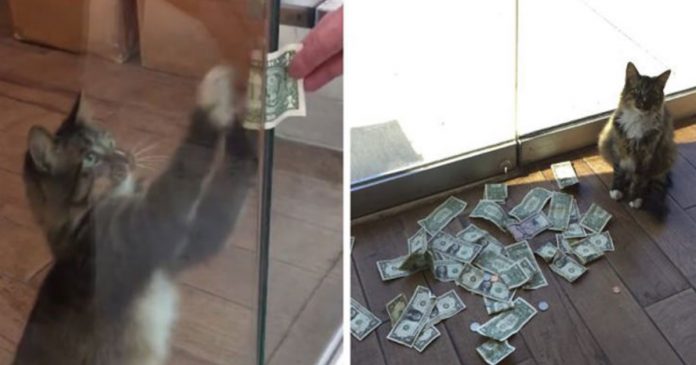 He’s what everyone called the Robin Hood cat. We all know of the tales: Robin Hood steals money from the rich and gives them to the poor. There have been stories of other people doing things similar to what the thief has done. A rescue cat named Sir Whines-A-Lot, did something similar to Robin Hood’s adventures and started his own good deeds to help the needy.

The rescued cat lives in an office called GuRuStu, a Tulsa-based marketing firm. There, his adventures to help the needy started. Stuart McDaniel, the founder of the company, came to his office one day and found lots of money bills on the floor by the glass doors and Sir Whines-A-Lot standing guard over the money.

“It kept happening, but we didn’t know why. So we decided to test a theory,” Stuart shared. “We tried sliding money through the gap in the door, and the cat hopped up and snatched it.”

McDaniel assumes that when people pass by and sees Sir Whines-A-Lot, the cat encourages them to play with him and uses bills as a way to get his attention. When they do, he immediately snatches them.

“They probably put it in to mess with him, and he snatched it. When you hold money there, he’ll bat at it playfully at first, like, ‘Oh, that’s kinda fun.’ But then, all of a sudden, he’ll bite it and rip it from your hand. He does it so fast, you don’t even realize what’s happened.”

Since this Robin Hood cat could not put the money to good use by himself, McDaniel decided to donate the money to the Tulsa Day Center for the Homeless. All his appreciation goes to the hard work of Sir Whines-A-Lot, since they have raised more than $100. The money donated was done under the pseudonym CASHnip Kitty, a term of endearment for the lovable thief of a cat.