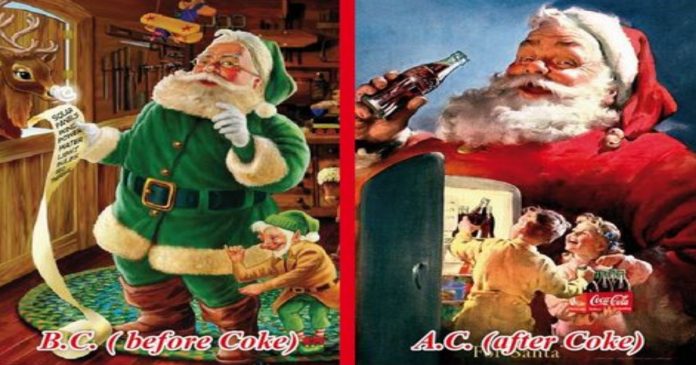 Merry Christmas! This the season where the big fellow in red is the most popular, Santa Claus! Kids know him to be wearing everything in red. The suit, the long hat, the high boots, and his signature long, white beard. Speaking of Santa’s red suit, do you want to know where it originated? You may be surprised to see photos of Santa on the internet wearing a green suit. It’s true! Here is the story of how Santa’s suit transformed from green to red.

According to folklore, Santa Claus originated way back in the 4th century A.D. Even as a child, he was generous and kind, willing to help poor people and the ones in need. He carried this trait with him even when he was growing up, and when he got older his generosity did not come unnoticed. Grateful people called him “St. Nicholas” due to his unselfish spirit of giving. He was remembered even after he has passed and later was recognized as a symbol of kindness and sharing, naming him “Santa Claus.”

His symbol became a legend, but stories about his physical outlook and his clothing were not described in detail. Though, according to legendary stories circulating the world, there was a myth that started in the 17th century about ole Saint Nick. He was known to be roaming to places withstanding the heat or the cold. Green plants stay fresh even in severe cold, and the color green represents magical powers. During winter, folks are known to put green plants inside their homes. Legend has it that Saint Nick, or Santa Claus, wears a green suit when he distributes presents to the kids, and everybody believed that he has magical powers. This has since been the original image of Santa Claus.

The image of Santa Claus was not as popular then as it is now. There were no fixed images of him back then. Believe it or not, the image of Santa Claus that depicts the spirit of Christmas until today is actually created by the popular soda company, Coca-Cola. In the 19th century, the soda company would drop its revenue during the winter since only a few people would drink Coke products during the cold season. To improve the declining situation, in 1931, the company invited American artist Haddon Sundblom to create Santa Claus dressed in red, a color that symbolizes power. Sundblom’s friend, Lou Prentice, was the original model for the illustrator’s Santa. Wearing a long red hat and holding a bottle of Coke, hence the birth of the kindly plump elderly gentleman we now know as Santa Claus. Adding a slogan, “The Pause That Refreshes,” the new image of Santa Claus holding a Coke was used in various advertisements in newspapers, magazines, and giant billboards all over the world. Since then, Coca-Cola has been the most popular soda on everyone’s tables during the Holiday season.

Sundblom has created hundreds of Santa Claus’s images for 30 years. People nowadays picture Santa as the plump, elderly man with a long white beard, wearing a red suit and a red hat. He is also depicted as a happy and kind person who rides a sleigh pulled by reindeers, flying on Christmas Eve to bring presents to good little children. As of late, we rarely associate Santa Claus with Coca-Cola. He is simply a symbol of happiness and giving during Christmas.

Ho-ho-ho! Merry Christmas, everybody! Share this story of Santa Claus on your social media to enlighten everyone during this Holiday season.

She Has Been Dating This Man for 2 Years in China;...