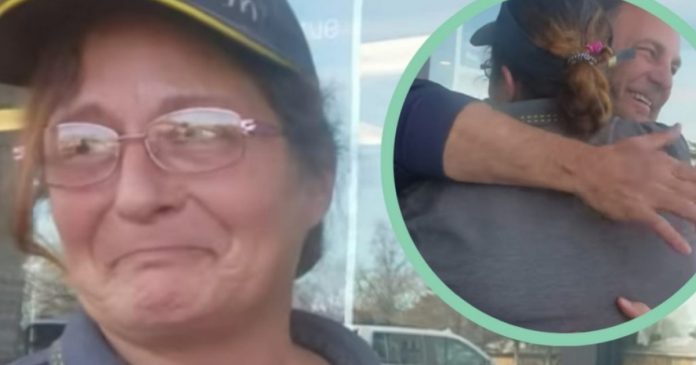 Vicki Anderson, 53, from Kansas, USA, works as a regular McDonald’s employee. Her finances are not too good, though she remains very optimistic. She is a kind server to the customers and an entertaining employee that has earned the friendship of the regulars. Never has she expected that her positive attitude towards others would be rewarded.

Vicki owns a vintage car which she usually drives to and from work. During the fall season, her car often broke down and eventually gave up and was beyond repair. She resorted to a colleague for carpooling and decided that she had to look for a second-hand car as soon as possible.

One day, a regular customer named Chris Ellis passed by the McDonald’s drive-thru. Vicki chatted with him about places where she could purchase cheap second-hand cars. Ellis, in return, replied that he would help her find the best shop. He remembered her plight and told his son, Josh, to give his 2009 Pontiac G6 to Vicki as a Christmas gift.

▼The surprise for Vicki arrived on December 9. New tires on the car, filled it with gas and drove it to McDonald’s. Looking confused, Vicki broke out into tears as Ellis handed her the keys.

“That black car is yours!” Chris Ellis said, handing her the keys to her new car.

She quickly hugged Chris and his son, Josh saying, “God bless you…”

▼The best early Christmas gift Vicki has received from a regular customer who claims that she made him smile every time he visits McDonald’s.

Chris Ellis also thanked Vicki for her kindness and a warm welcome every time he visited McDonald’s for a meal. Vicki brings joy to the customers, and in return, they give her a token of their appreciation.

Merry Christmas, everyone! Share this inspiring story with your friends and family or on your social media and like our Facebook Page. When you receive a blessing, pay it forward.