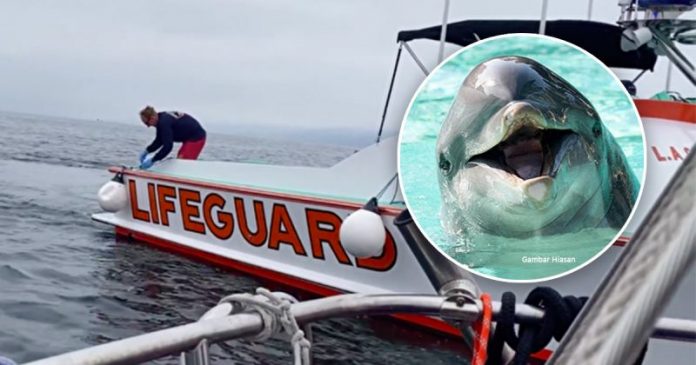 People will never understand why unfortunate incidents happen in life. Even accidents happen to the most careful people. The following story happened to a 26-year-old woman who was rescued 12 hours after she was found floating alone at sea.

An unidentified woman was rescued and was said to have been stranded on open waters for about 12 hours. The incident has taken place off the coast of Marina Del Rey. However, her luck has changed when a sailor happened to be nearby.

Khosrow ‘Koz’ Khosravani, a former lecturer at UCLA in information technology, has recently acquired a new yacht, which he named the SV Defiant, and was just certified to sail. He has invited three of his friends to go on a sailing trip with him from Marina Del Rey to Paradise Cove in Malibu on September 26th.

It was a bright sunny day, and everything was going perfectly when they all spotted a wonderful scene near the boat. Koz went off route for a little bit to get closer to a pod of dolphins swimming nearby. The boat followed the dolphins and the friends took some photos of the beautiful scenes when they noticed that there was a hand on the open waters. An almost-lifeless woman was floating on the water.

“I saw a hand,” Koz said. “If it wasn’t for the dolphins, I would have never seen this lady, who only had a few minutes to live.”

Koz, who was certified to be a sailor weeks earlier at the American Sailing Association after taking some courses, did the necessary precautions to save the woman by throwing a floating device at her. He noticed that she was too weak to hang on, so he threw a buoy at her attached to a 23-meter-long cord, which took 2 attempts before he successfully rescued the woman.

The unidentified woman was naked and dehydrated, so they covered her up with a towel and some blankets. She seemed hungry, tired, and thirsty, and too weak to move.

“I asked her if she is alone or if there are other people we should look for,” Khosravani recounts. “She could barely say her first name, and she said she’s alone.”

Rescue ship captain for LACoFD Ocean Lifeguard Division, Matthew Rhodes, took part in the rescue mission after being alerted of the incident. According to him, the rescued woman was suffering from hypothermia, and the sea temperature was about 19°C.

“It was pretty gloomy conditions,” Rhodes later said of the situation, adding that the water in the Pacific Ocean was 19°C that day. “We went out as quickly as we could. We transferred a 26-year-old female from their sailing vessel to our rescue boat.”

Later, they learned that the woman had gone for a midnight swim the night before and was knocked off her route 2 and a half miles due to strong offshore currents. After her rescue, they noticed that her skin had a greyish tone which meant she suffered from hypothermia. According to the woman, she was floating on her back for 12 hours before she was rescued.

Luckily, after 12 hours, Khosravani’s boat was nearby, and a pod of dolphins was swimming by, and she was seen floating on the open sea.

With a sigh of relief, Koz recalled, “There is something in this universe, it just wasn’t her time. I consider myself maybe spiritual rather than religious. But the things that happened one after another, if all wouldn’t have aligned together, this lady wouldn’t be with us today.”

“There is something in this universe, it just wasn’t her time,” Khosravani said.