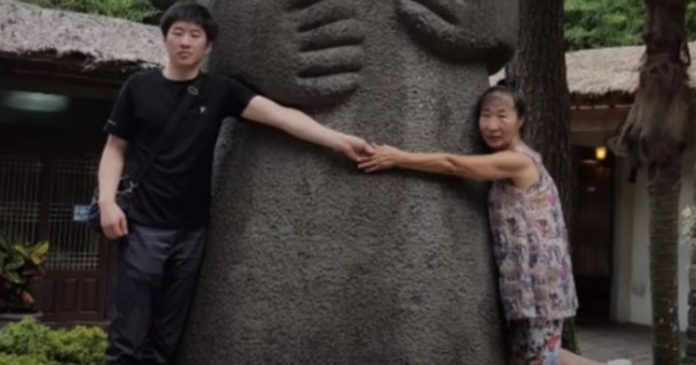 Honestly, all people don’t want to be deceived, especially by a loved one, someone really special that they trusted and respected. Though, forgiveness is inevitable. A well-known YouTuber from South Korea, Bozai, admitted that he was once deceived by his wife, but in the end, love prevails and he forgave and accepted her.

38-year-old Bozai shared stories of him and his 65-year-old girlfriend on his YouTube channel, “A Loving Couple.” Although many netizens opposed the relationship, the couple still married. After the wedding, Bozai has discovered something that his wife has been hiding from him for years!

The couple met at a volunteer activity. When Bozai saw her for the first time, he knew that they were destined to be with each other. He pursued her for quite some time and later began communicating with each other. They began sharing their stories on his channel, and although they have released their first video together only three months ago, it has garnered 56,000 “Likes” from netizens, and soon the couple had avid followers on YouTube.

Just when the couple felt that the relationship has been going smoothly, they started to have twists and turns that tested their relationship.

Some people objected to their relationship due to their age differences, but they endured all the difficulties that they have encountered. Although the couple has been together for 8 years, the sister of Bozai’s wife always opposed their plans of getting married. Most people jeered and made fun of them until the sister has finally passed. When they were finally married, Bozai did not expect to face another problem after the wedding.

Usually, couples with huge age differences disagree about money, or one member of the couple cheats. Though in this situation, Bozai “felt” that he was being deceived by his wife on their wedding night. He instantly knew there was something not right.

On their wedding night, when the couple was starting to get intimate, he felt that his wife’s body was strange to his touch. She did not “feel” like a 65-year-old woman. Bozai did not hesitate to question his wife about this matter. She admitted that she was afraid he may not love her because she was older than he expected. She was, in fact, not 65-years-old, but turning 73 this year! Their age difference shifted immediately from 27 years to 35 years!

Although Bozai has been deceived for nearly 10 years and the candles on her birthday cake have been a lie all those years, Bozai’s reaction to her explanation made people believe that they were made for each other, and what they had was true love.

After learning of the truth, Bozai went live on his YouTube channel and apologized to their fans that his wife has hidden her real age. He finally said on a live broadcast that his wife is actually 73-year-old and that he still accepts her despite this.

Additionally, Bozai also told their fans that even if she has lied about her age, this does not change the fact that he is still very much in love with his wife. Not only that. Since the truth is now in the open, Bozai said the sweetest words to his wife, “Whether you are 65-year-old or 73-years-old, you will always be my most beautiful bride!”

Now, that is true love! Accept what you can never change, and with this, you will be truly happy. #RelationshipGoals

She Has Been Dating This Man for 2 Years in China;...