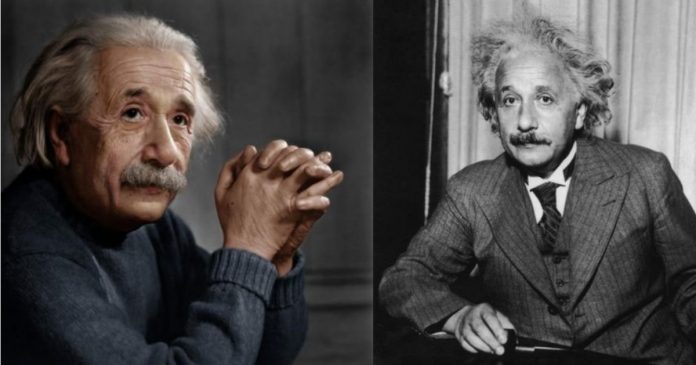 Albert Einstein is one of the most important and well-known scientists of the 20th century, known as the “Father of Modern Physics,” and even won the Nobel Prize in Physics in 1921. And the genius man has left a lot of wonderful pictures for the world to keep remembering him. No one has noticed that all his photos were mostly close-up or half-body shots, but recently rare full-body shots of the genius man have emerged on the internet.

Albert Einstein was born in Germany to Jewish parents. Einstein has greatly contributed to Theoretical Physics, in addition to the discovery of The Law of Photoelectric Effects, and also brought forward both Narrow and General Theories of Relativity. His remarkable scientific achievements are still highly discussed and respected today, but in fact, he is more interesting than we thought.

In fact, Einstein often flashes strange and wacky facial expressions in his photos; the most popular one is when he stuck his tongue out, which everyone must have seen.

Most textbooks and biographies of Albert Einstein shows only half-body shots of the genius man and no full-body photos. Though recently, full-body photos of Einstein have emerged on the internet that left the whole world surprised! Photos show that he often wore shorts and women’s sandals, and checks his looks in
mirrors.

It is said that Einstein did not like wearing socks since he was still a child. He says that most of the time, his socks end up with holes at the toes, so he wore open-toed shoes since then.

One day, he could not find his slippers, so Einstein had to wear leather shoes that day. He found it strange not to wear socks with leather shoes, so he made his last resort… wear his wife’s sandals! He fell in love with the sandals, so he thought about purchasing a pair for himself.

Since then, we would often see him wearing women’s sandals in most of his full-body photos. Who would have known that the genius man with a powerful image would be wearing women’s footwear and be proud of it? It clearly shows that the man behind such brilliance and intelligence is naturally humorous!

Who would have expected this?

Share this article and on Facebook with friends and family if you’re a fan of Albert Einstein!