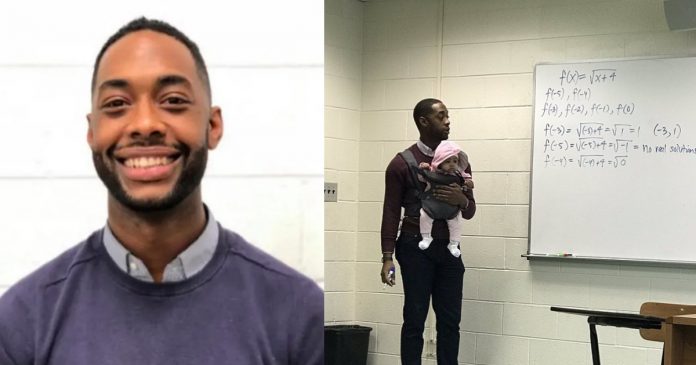 For young parents, taking care of children is not an easy task, especially if you are still a full-time student! A few days ago, a male student in the United States asked for leave because there were no available babysitters at the time. No one in the family could help take care of the child. He had to take his daughter with him to class.

After learning this, a university professor, Nathan Alexander, didn’t hesitate to lend a helping hand. The students were quite surprised when they witnessed what he did…

Currently, Alexander works at Morehouse College in Georgia, USA, which is one of only three 4-year men’s liberal arts colleges in the United States. One day, a male student could not find a temporary babysitter for his daughter, but still could not find relatives and friends to help him. He had no other choice but to bring his daughter with him to school. When Alexander found out that one of his students brought his baby girl to his class, he decided to help by being the girl’s babysitter without any hesitations.

“I’ll carry and look after your child, so you can concentrate on copying your notes!” Alexander said.

Such heart-warming behavior deeply moved every student in the class. Afterward, touching photos were also taken and uploaded. Students were amazed while witnessing Alexander carry the baby girl and give a serious lecture at the same time, and the little girl behaved. No crying or making any fuss.

The student who took the photos even revealed that the professor not only carried the baby during class but also when answering the students’ questions after class, and took care of the baby girl like his own!

The incident immediately caused an enthusiastic response, and many students who had taken Alexander’s classes responded with touching comments. One student said: “He is one of my favorite professors. He really cares about his students and is willing to sacrifice personal time and provide help in every possible way.” Another student mentioned that Alexander was his favorite teacher. He was about to drop out of school at the time, but after seeing his grades, the teacher did not hesitate to provide help. With one-on-one tutoring, he let his grades jump from D to A.

Other netizens also praised Alexander, commenting that he is the best teacher they have ever seen. Alexander was very humble about this and joked that maybe it was because he was too boring in class that the baby girl slept so well, and he also said that he would not object to students bringing their children to class, hoping that he could assist when needed.

A kind-hearted professor! He saw that the students needed help, so he took the initiative to assist without hesitation. He is an angel here on earth!

The World’s Most Beautiful Princess! A Noble Family-born Woman with Good...