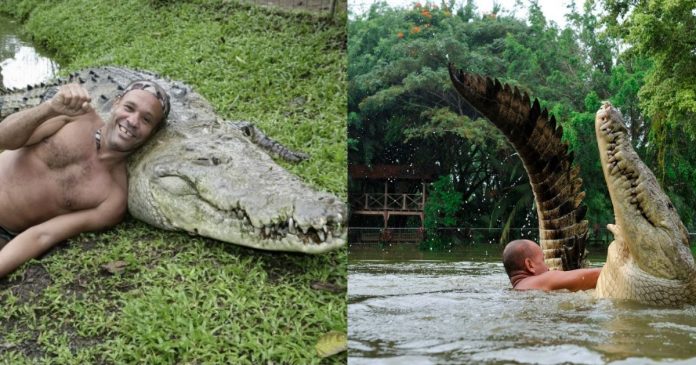 Instinctively, a crocodile is extremely wild and aggressive. If you encounter even just one of these predators, you can try to avoid getting near it. However, there is a fisherman in Costa Rica who saved a crocodile. Living with it for more than 20 years, the relationship between a person and a crocodile is incredibly legendary.

In 1989, a young fisherman named Chito found a seriously injured American crocodile by the river. It was reported that a local farmer was worried that his cattle would be attacked by the crocodile and shot it. At that time, the crocodile’s left eye was shot. Lying on the bank of the river, dying, Chito took mercy, and worked with his friends to carry the crocodile onto the boat and took it home for treatment.

Chito named the crocodile Pocho and took good care of it. Even at night, he would sleep with Pocho. Chito said, he knew that Pocho was injured by a human. “In the beginning, I gave it feeds, and he refused to eat. I try to touch and talk to him, hoping he can feel that I care about him and let him know that not all humans will harm him.”

After several months, Pocho slowly recovered, so Chito took him to the river nearby and sent him back into the wild. Unexpectedly the next morning, Pocho came back following the smell and appeared on Chito’s porch, to his surprise: “I thought at that time, maybe the crocodile might be tamed.” Amazingly, every time Chito called Pocho’s name, he seemed to understand it. Pocho was like a dog following its owner.

Chito put a lot of effort into taking care of Pocho, getting along with him, and even divorced his wife for this. “She doesn’t understand me and thinks I spend too much time with Pocho, then I don’t care. My wife can do it again. Marry another man, but Pocho is unique.” Later, Chito also remarried and had a daughter. He did not regret his decision to give up Pocho at that time.

At first, Chito was worried that if the crocodile was discovered, Pocho would be taken away by the authorities, so he kept it secretly in a pond in the forest near his home, but it was still discovered that he was with Pocho in the pond. He was reported for swimming with a wild animal. Fortunately, the government agreed that Chito should raise Pocho under the supervision of relevant units. Since then, the story of Pocho and Chito has spread around the area, and in addition to local media reports, it even became popular in Chile, the United States, the United Kingdom, and other places. The dynamic duo became quite famous.

Many tourists also come here especially, so Chito began to have small-scale interactive performances with Pocho every Sunday, charging tourists US $2.00 as an environmental cleaning fee, “He became my friend. I don’t want to use him as a slave. I treat him in a good way, and I won’t exploit him.” In addition to being able to understand Chito’s name, Pocho even hugs and kisses Chito, and in return, he even touches her belly. The tourists treat Pocho gently. His behavior is impressive, and this made scientists and animal behavior experts curious.

A filmmaker from South Africa, Roger Horrocks, filmed the documentary “The Man Who Swims With Crocodiles” for Chito and Pocho, and he speculated that Pocho’s gentle behavior may have been caused by the original gunshot wound that affected his brain. It may have destroyed its hunting and predator instincts and made Pocho tamed, but it still does not rule out that Pocho may return to the wild one day. In this regard, Chito chooses to believe in his friendship with Pocho, “It may have happened (attack) if we only got along for two or three years, but we have both lived together for 20 years.”

Later, Chito continued to confirm his trust in Pocho. He lived gently until the end of his life. He died of old age in October 2011. It is estimated that he was about 50-60 years old. Chito organized a grand event for his passing. At the funeral, the local people also liked Pocho, and many came to attend. At that time, Chito cried bitterly at the funeral. To him, Pocho was like a part of his family, irreplaceable.

After Pocho’s death, Chito is still committed to telling his story, hoping to let the world remember that there was such a gentle, grateful crocodile. It is reported that Chito later adopted an American crocodile for domestication and raised it the same way he raised Pocho. He named it Pocho Jr., but he believed that in his heart, Pocho can never be replaced.

Pocho will forever be missed.

Here are 2 YouTube videos showing the friendship shared between Chito and Pocho.

A Beautiful Soldier Adopts a Retired K-9 Dog She Trained 2...