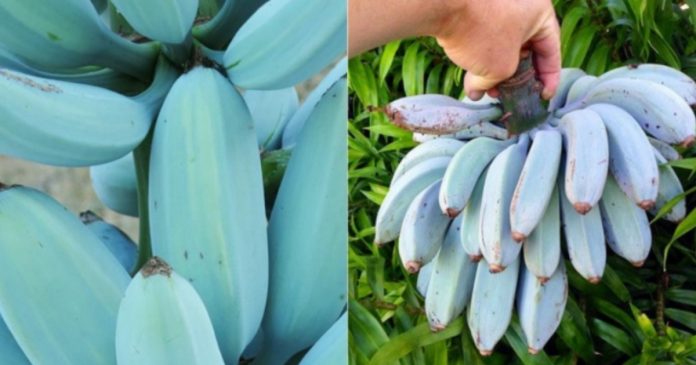 When a friend tells you to try a “Blue Java Banana,” would you believe him/her immediately? Apparently, these blue-colored bananas do exist in some countries of Southeast Asia. Take a look at the following photos for proof.

Take a look at the following 5 pictures. How many of these types of bananas can you identify at first glance?

These are the most common bananas sold in local markets, and most probably the ones that have been displayed on your fruit baskets every now and then.

What if… you walked into the nearest fruits stand and bought a new bunch of bananas?

… and saw these hanging among the others?

Would you buy a bunch and try them, if they were real?

They are known as the Blue Java bananas. They’re a beauty, aren’t they! Their striking appearance will make you wonder if they’re real, or a hoax.

While we are all familiar with the more common yellow bananas, the peel of these Blue Java bananas is so-called because of their unique color.

Are they naturally blue?

Before they are ripe, Blue Java bananas have that silvery blue or blue-green peel due to their natural wax coating. Apparently, the blue tint fades as they mature, then becomes pale yellow.

Meanwhile, the edible part of the fruit turns into a creamy white color.

Places where they are grown and harvested

The Blue Java banana is a rare hybrid of Musa acuminata and Musa balbisiana, and is known to survive cold climates as low as -7°C.

Since the 1920s, these species of blue bananas have been cultivated in places like Hawaii and Southeast Asia, even in Central America. They go by the name ‘Hawaiian banana’ in Fiji, ‘Krie’ in the Philippines, and ‘Cenizo’ in certain parts of Central America.

Fun fact: People who have tasted the Blue Java bananas have said that they have the consistency and taste of custard or vanilla ice cream

Blue Java bananas have natural compounds in their soft and creamy fruit, giving them that distinct flavor and aroma of vanilla. In Hawaii, they are called “ice cream bananas” and are one of the tastiest types all over the world.

On the contrary, not everyone agrees that the Blue Java tastes like vanilla ice cream

In a YouTube video, someone did a review about the taste of this unusual fruit, making it seem like the Internet has grossly exaggerated the claims about this blue fruit.

At least Pisang Merah has that red peel that stays red

Just like a common banana, the edible fruit of the red banana still has the normal yellow color.

Apparently, there is a photo of a completely blue-colored banana posted by a Twitter user, @ThamKhaiMeng, that has gone viral and everyone is bewildered trying to figure out if it is real or a hoax.

Guess you’ll have to actually see and taste it to believe!

Believe it or not!