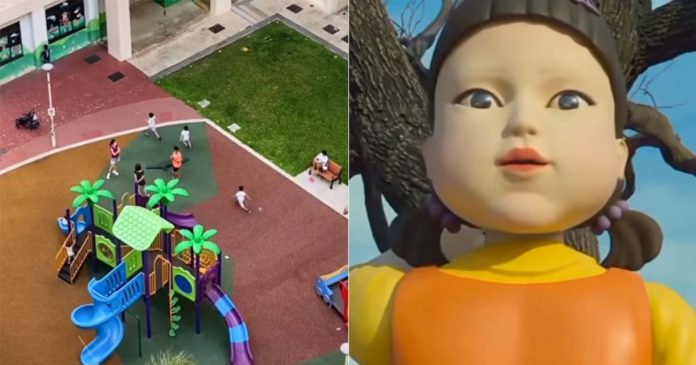 Fun games we used to play outdoors when we were children have become deadly in NetFlix’s hit series, Squid Game. Unfortunately, parents could not take control of what the children are watching on TV nowadays. Gory and violent shows are accessible to them, and most parents are oblivious to these.

Although the NetFlix series has become a worldwide hit since the first day it has been released, the kids who are not supposed to have seen it in the first place are playing the deadly game, the violent version that has been featured in the Korean series.

A group of kids who are roughly aged between 7 and 9 has been seen playing the violent game at a playground located at Block 406 Sembawang Drive in Singapore. Though it was just for pretend, it was not a good sight to see.

On October 9, a video was posted on TikTok showing children between the ages of 7 and 9 freely playing the Red Light, Green Light game featured in the first episode of the series.

The video shows kids playing the violent game at the Housing & Development Board estate playground.

How they played the game

In perfect Korean language, the spotter will sing the same song from the series, while covering his eyes and facing the wall. “Mugunghwa kkoci pieot seumnida!”

While singing the three children would run towards him and freeze on their tracks when he turns and looks at them.

Each time the boy sings and faces the wall, the other children would run towards him, which is their finish line.

When the boy turns to them again, and movement is detected when they are supposedly frozen in their tracks, the boy will pretend to shoot them, and they are eliminated. The person shot will fall to the ground.

The spotter can be heard shouting “BANG!” in the video while movement was detected from the two kids. He pretends to shoot them with his finger.

The kids then fall to the ground as if they were shot.

Sadly, the adults at the playground did not seem to interfere with their play. The game, which is supposedly bad for kids, the parents seem to consent.

How the violent game is really played in the series, Squid Game

In the series, released on NetFlix, a giant animatronic killer doll will sing that sinister-sounding line, “mugunghwa kkoci pieot seumnida” while the contestants would run to the finish line.

According to a Korean translator with the username @youngmimayer who posted on TikTok, the line that the gigantic doll sings on the Red Light, Green Light episode translates to “the Mugunghwa flower has blossomed,” which is the name of the Korean game.

Mugunghwa, or the Rose of Sharon, is Korea’s national flower, which only blossoms in the morning.

For the sake of the English-speaking countries, the game changed its name to “Red Light, Green Light,” since the game has a similar concept. Though, there are differences.

During the 1970s to the 80s, the South Korean game’s song would increase its speed when the game progresses, making the players run faster to reach the finish line.

In the American version of the game, the song’s tempo does not change, though it depends on the players’ choices.

However, the Korean version is more challenging as the game progresses, making the song faster and unpredictable, in which case the players trip along the way when they run.

The spotter, though, can revise the song and create other variations, as well.

This dying chimpanzee smiles for the last time when she was...