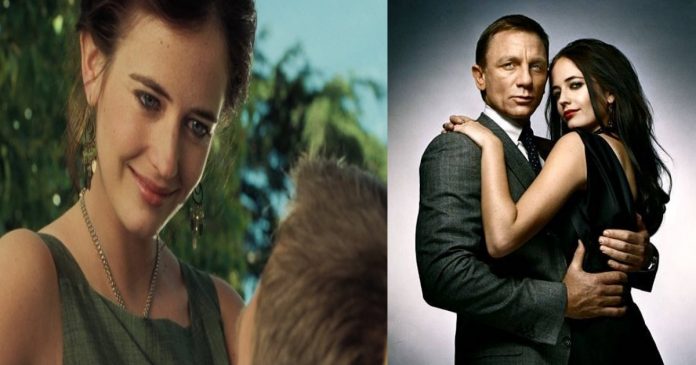 “007: No Time to Die” starring Daniel Craig is currently showing in theaters. In addition to the wonderful plot, a large number of action scenes, and death-defying stunts, everyone is also very curious about the hot and sexy Bond girl.

Although Ana de Armas is now the new Bond girl in the latest 007 movie, many fans still think that the most charming and classic Bond girl is Eva Green.

French actress Eva Green played the role of the Bond girl Vesper Lynd in “Casino Royale” in 2006. She showed off her alluring beauty and good figure in the movie, which made her become the sexiest goddess in the hearts of countless movie fans. It has also earned her the title of “The Most Famous Bond Girl Ever”!

Later, Eva Green played the exotic heroine Sibylla in the Hollywood blockbuster “Kingdom of Heaven”, playing the cold and alienated Princess of Jerusalem!

In Tim Burton’s “Dark Shadows”, Eva Green and Johnny Depp co-starred. She played the role of Angelique, the bad witch who was desperate to get love. She was cruel and eager to have love from Johnny Depp’s character. She was impressive in her role, especially the bright red lips that her character has in the movie was a super bonus!

In the goth-themed “Sin City 2: A Dame to Kill For”, Eva Green’s glamorous red lips make many men fall in love with her, and the graceful figure looming under the tulle dress is really very charming~

In “300: Rise of an Empire”, Eva Green plays the glamorous and dangerous bloodthirsty warrior queen Artemisia I. Compared with the soft and sexy style she wore in her previous movies, this time the female warrior is more fierce, dangerous, and crazy. Although her clothing did not expose her body too much, her voluptuous figure still conquered countless male fans!

In addition to having the beauty that women around the world envy, Eva Green also has her own ideas. In an interview, she said that she did not like to be praised for being beautiful: “I hope everyone can focus on the characters I interpret. As for acting, after all, I do my best. If I only pursue beauty, then I wouldn’t be a good role model!”

It is said that her hair was originally dark blonde, but since she was 15 years old, she deliberately dyed it black, to get rid of people’s mindless impression of blondes!

Do you like Eva Green more after watching her movies? I think her red lips bring out most of her beauty.