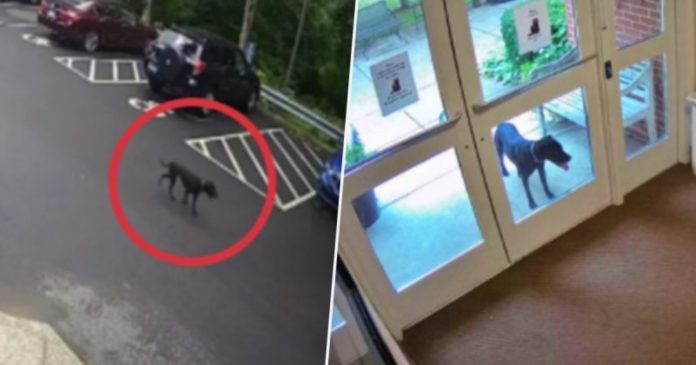 Many people who have a pet cat or dog know that they need their owner to accompany and play with them for some time. At times, they feel very lonely when their masters do not pay much attention to them. Though at the end of the day, we feel that they are our stress reliever when we arrive home.

A dog from the United States named Indy felt she had been abandoned by her owner. Since she has been waiting for her owner who has not returned all day, she walked 3.2 kilometers to find her master she loved so much!

Liza named the puppy Indy and raised her. When she goes to work, Liza drives and takes Indy with her to the office.

One day, Liza was attending her friend’s wedding at a remote location, so she asked for a leave from work, and left Indy in her father’s care for the day.

Surprisingly, Indy realized that Liza didn’t take her to work that day, making her assume that she had been abandoned by the owner.

So without waiting any longer, Indy sneaks out of Liza’s father’s house and has walked 3.2 kilometers to Liza’s workplace. Indy wanted to find and call her.

The clever dog has memorized the way to Liza’s workplace.

Liza’s co-worker was shocked to see Indy in front of the office door, so she immediately called Liza and gave Indy food and drink. Liza’s employer then sends Indy home.

This little adventure of Indy was very surprising and touched Liza’s heart. Fortunately and thankfully, Indy did not experience any unfortunate incidents on the way to Liza’s office.

Indy’s wholehearted love for her owner is very heartwarming.

After this incident, Liza explained to Indy, who understands very wisely, that she will never be lost and idle if she learns to travel to far places and finds her way home!

Friendly Orangutan Would Not Let Go a Female Tourist and Wanted...

Cats get special birthday cake on their birthday and their reactions...