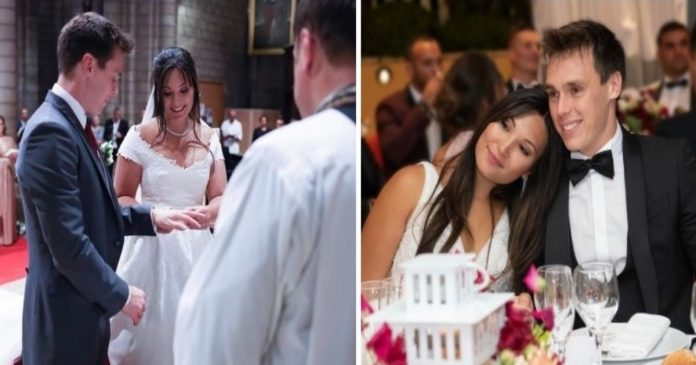 When it comes to royal life in Europe, everyone must think it is glamorous and dreamy! However, looking at history, most of the members of the royal family are caucasian, and Asian women are rare. Although, Danish prince Achim married Wen Yali, a woman of Chinese descent. She became the first Asian princess, though similar cases are almost unheard of after that…

Another Asian girl married into the European royal family and her story has been published in newspapers and social media! The Prince of Monaco, Louis Ducruet, recently married an Asian girl with oriental features, Marie Chevallier, and she not only became a member of the royal family but also became the daughter-in-law of the most beautiful Princess Grace Kelly of Monaco.

As the other half of Prince Louis, the background of the Asian princess is, of course, subject to a great discussion! She was born in 1993 and 28-years-old this year. She was born in an ordinary mixed-race family. Her father is French and her mother is Vietnamese. As a French-Vietnamese girl, she has the classical beauty of the Asian and European race.

Although she comes from a mixed-race family, her family’s economy is not too rich. Marie’s father left early, leaving her mother alone to raise her. The filial Marie couldn’t bear to see her mother working so hard, so almost all of her spare time in school was consumed with part-time jobs, such as French teacher, ticket seller, cashier, etc. She has done all she could, just hoping to help minimize the financial burden.

Although the family burden is heavy, she never hides it. She met Prince Louis at Western Carolina University and was open and honest about her life. She confessed that she became a “professional migrant worker” to make money. Such a simple and natural attitude touched the heart of the prince.

Marie’s hard work deeply attracted Prince Louis. At the time when the two started dating and studying together, they not only went to France to study management together but also settled in Monaco after graduation to work in banquet planning. It can be said that it clearly was love!

The two supported each other and spent countless hours together. In 2019, the lovers finally got married. Prince Louis of Monaco kneeled and proposed to Marie. On a romantic beach with breath-taking views, the couple decided to spend their lives together. The picture is really like a fairy tale.

After getting married, Marie Chevallier added another piece to the history of “Asian Princesses”, and she became Grace Kelly’s well-known granddaughter-in-law. The two have a sweeter relationship after marriage, and can often be seen on Instagram. Here is a photo of the couple very much in love.

Not only that, but the couple also raised a “dog son”, a family of three can be said to be very happy~

Even though the young couple is married, the relationship continues to heat up. The prince even gave his wife a lot of roses on Valentine’s Day to express his heart’s care and love for the other half.

The two also often travel around, leaving the best memories of each other’s love together. With each other’s company, their lives become more exciting and full of laughter.

Marie gradually learned how to be a competent princess. When facing the people and the camera, she immediately shows a calm and elegant side, and she was quite confident.

The prince became more stable with his company and learned how to take care of his cherished one… The love story of the two perfectly interprets “because of love, we become better people” and also tells us, Love is more than everything, more than race and color.

The story of this Asian girl marrying into the royal family is so inspirational and touching! To be true to and about yourself is the most attractive.